The 2012 April Fools incident involved the compromise of the Roblox website, resulting in the website being taken offline for a brief period of time. While there was no actual hacking of the website, only a breach with the Roblox admin panel on the testing sites, the incident was widely referred to as such both during and after it occurred.

The incident was thought to have begun when user Ellernate gained access to Roblox's admin panel by creating an account on SiteTest3 using a Roblox Administrator's Roblox Username.

Ellernate was responsible for the website's most notable "hacking" on April 1, 2012. Ellernate gained access by logging into an admin account on SiteTest3 (because not all admins were on the testing sites). The use of the .ROBLOSECURITY cookie, the use of the warning banner, and unauthorized user promotions are all examples of ROBLOSECURITY cookies. In a 2017 Reddit comment, former Roblox moderator Gordonrox24 stated that "It was nothing... You won't see it happen again".[1]

A suspected precursor to the incident was a forum discussion that devolved into an argument between Minish and Merely about money and Roblox's economy. Caleb244 allegedly took over Minish's account, and Minish purchased Merely's famous Domino Crown, which was Merely's personal favorite avatar shop item. The forums quickly became inundated with threads debating the events. As a result, the two users were banned. This would also result Merely briefly leaving Roblox.

Soon after, Ellernate-controlled accounts Pheedy and are17 were promoted to moderators and used their newfound authority to unban Minish. During this time, the prices of hats in the avatar shop dropped dramatically, and hats were released by the minute for 1 Robux. Some hat names were changed, such as Explosive Hair was renamed to "Rocket Hair", Hooded Spacelord was renamed to "Noob Hood", and Memento Mori was renamed to "Candle Skull". The user iTrapped, or Isaac, the creator of Brick Planet, did this.

It is believed that 1dev2's account was one of the compromised accounts. During the event, many items were added to their inventory, and their avatar was changed several times. This led to a moderator subsequently deleting their account. This ban was never lifted, but 1dev2 may have been granted temporary access to their account after the event, during which time they uncopylocked their game "Welcome to the Town of Robloxia".

During this time, the perpetrator released multiple Roblox assets on the official Roblox account. They first released a new face with the title "c:" into the avatar shop for 100 Robux. Stickmasterluke's account was the only account that bought it (or one of the breachers added it through their avatar), and anyone else who tried to buy it received an error message. The image asset for the face can be retrieved on the Roblox website. Another "c:" face was created and can be also be retrieved on the website. A third face, "hai guize derp" was also released and can be accessed on the Roblox website as well.

Other accounts affected during this incident include:

Several avatar shop items, mainly hats that were never intended to be released were during this update with altered names. These hats were quickly taken off sale after Roblox gained control. These included:

Banners were added to the top of the website by Ellernate and frequently changed colors and displayed questionable content. In chronological order, all banners are below:

After all the activity occurring, Roblox staff brought the site offline and reported that they were attempting to patch up the currency system. The website was brought back online during the late evening of that day. The site test admin panel was updated and the Roblox avatar shop was offline until the following evening.

In a Roblox Blog post on April 2, 2012, it was announced that "Roblox experienced a site issue the evening of April 1st..., and they took the site offline". They noted that "Several assets were released from the avatar shop backlog that were not ready for production", and "Several accounts were incorrectly granted large amounts of Robux; some of these Robux were subsequently traded with other accounts." Some avatar shop items and currency transactions were audited and rollbacked, and they estimated the rollbacks occurred in fewer than 0.01% of Roblox accounts[2]. Some items were updated with new pricing, while other items were taken off-sale. The "c:" item was changed to Dr. Smyth Face and was temporarily available for purchase after April 2, 2012.

The Roblox website shutdown page at the time of the incident.

Briguy9876 stating that this "April Fools prank" wasn't a prank by Roblox.

Stickmasterluke wearing the "C:" face as seen on a video of a player visiting the Roblox page during the 2012 April Fools incident.

The "c:" face was one of many faces released by the individuals.

An event banner saying "Thank you Minish for messing up the economy. Nub."

An event banner requesting that people go and spam the forums.

A forum post by are17, who was one of two users to randomly become a moderator.

A post by Chro, one of several staff accounts that was hacked. Profanity has been edited out.

Profanity has been edited out.

Pheedy's account was compromised and given a Dominus hat. Profanity has been edited out.

A user sharing their speculations of the culprit behind the incident. 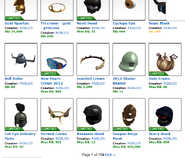 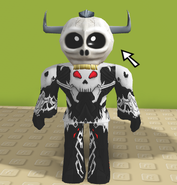 A user's avatar after being compromised from the incident.