The first edition of the Bloxy Awards were held during the 2013 BLOXCon event. This Hall of Fame spanned four BLOXCons (London, New York City, Chicago, and a virtual BLOXCon) and had over 20 awards.[1] 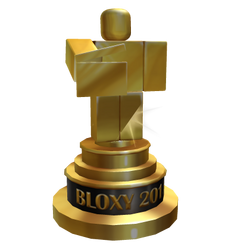 The first part was a part of the Roblox Film Festival, where players submitted videos that fell into one of five categories:

The second part of the Bloxy awards was a Hall of Fame where administrators gave awards to Roblox builders. Like with the Roblox Film Festival, players had the opportunity to vote for the winners.

This will be added soon.

This will be added soon.