Roblox Wiki
Register
Don't have an account?
Sign In
Advertisement
in: Events, Articles with trivia sections, Developer-made events,
and 3 more

Roblox is throwing an epic #BloxyAwards festival, and you're invited! Get ready to watch our biggest awards ceremony yet with all your friends right here within the world of Roblox for the first time ever.
The 7th Annual Bloxy Awards was an event on the Roblox platform, being first revealed in a trailer[2] on the Roblox YouTube channel. Voting for categories was held, but unlike previous years, the categories to vote on were broader, with only five categories to vote from. The hosts of the awards were Leah Ashe and JParty. During the live stream, a teaser for Egg Hunt 2020 was shown.

On February 19, 2020, OldBaronMondo published a blog post announcing that voting for the awards were open. Voting closed on February 24, 2020, at 12:00 PM PST. On March 4, 2020, YoSoyTofu published a blog post giving information about the awards, and explaining how the categories will work.[3] The blog post states the winners were chosen from 30 categories, and that only 14 would be featured during the final show, and the rest would be posted in an upcoming blog post. On March 11, 2020, 10 days before the awards premiered, a gameplay trailer was published to the Roblox YouTube channel.[4] The video contains a sneak peek of the game. On the same day the video was published, a blog post was published by OldBaronMondo regarding the awards.[5] The blog post reveals that the Bloxysaurus Rawx and Bloxypunk Top Hat would go on-sale for free on March 20, 2020. On the night of March 22, 2020 at 1:12 AM EDT, all items for the "Make a Difference" fundraisers unexpectedly went off-sale due to an unknown reason, despite the event page stating that they would all stay on-sale until March 30, 2020. It is possible that Roblox surpassed their US$100,000 goal, but it is difficult to know because it is unknown what the rate was. On March 24, 2020, Roblox put the free promotional items back on-sale to promote the event. On March 25, 2020, all winners were awarded The 7th Annual Bloxy Award for their work.

Similarly to the previous Bloxys, a virtual venue was also held for the event. Unlike the 6th Annual Bloxys, the venue included in-game live streaming of the event using a new in-game video feature tested in February 2020 with the Roblox Video Streaming - Technical Test game, of which giving feedback to granted the Lil’ Vernon the Red Dragon. It is also different because there were two winners of the Builderman's Award of Excellence. The live stream kept replaying in-game until March 30, 2020, and then was published to the official Roblox YouTube channel. It had its own unique section on the Games page during the first two days of the event.

Announced during the Bloxy Awards

These are the 15 categories with their respective winners that were announced during the Bloxy Awards.

7 of the categories had their winners announced in a Roblox blog post.

Exclusively for the Bloxy Awards, members of the Roblox community have created a series of special accessories to show support for Make-A-Wish and Code.org. All gross proceeds from the sale of these items (up to $100,000) will be donated to the organization(s) of your choice. These items will be available starting March 20th.

Make-A-Wish creates life-changing wishes for children with critical illnesses. Since 1980, Make-A-Wish has granted more than 500,000 wishes worldwide with the help of more than 43,000 volunteers across 50 countries on five continents. A wish is granted every 16 minutes, on average, somewhere in the world. Research shows children who have wishes granted build the physical and emotional strength needed to fight a critical illness. This can improve their quality of life and produce better health outcomes. Wishes can’t happen without community support, so thank you for supporting and sharing our mission so every eligible child can have their wish granted.

Code.org is a nonprofit dedicated to the vision that every student in every school should have the opportunity to learn computer science. To support this goal, Code.org works across the education spectrum: designing courses or partnering with others, training teachers, helping change government policies, expanding via partnerships, and creating marketing to raise awareness and break stereotypes. Code.org also organizes the annual Hour of Code campaign which has engaged millions of students globally. Available in over 63 languages and used in 180+ countries, Code.org is the largest provider of CS curriculum globally, and their courses are recommended by 99% of surveyed teachers.

These items were created specifically to promote the 7th Annual Bloxy Awards. They are not to be confused with promotional code items. They went off-sale on the night of March 22, 2020 at 1:12 AM EDT due to unknown reasons, which was before the end period of the Make a Difference items, March 30, 2020. However, these promotional items were brought back on-sale on March 24, 2020, due to unknown reasons.

The event received some criticism for the Xbox controls being uncontrollable in-game, which is a disadvantage for players trying to complete quests, especially when Xbox players are unable to move out of the spawn area. All Make a Difference items went off-sale early before the official given end date that was provided, March 30, 2020, which caused players to accuse Roblox of giving misleading information. These items going off-sale early caused some users missing the opportunity to get these items. Some community members also considered the event "rigged", because Adopt Me won a total of 4 awards, being: Best Game Update, Most Concurrents, Most Visits and Highest Total Playtime. The event was also criticized due to Arsenal winning Game of the Year, upsetting the Adopt Me and Royale High fanbases. The reply section of Roblox's Game of The Year tweet is filled with arguments of which game should have won over the other.

The white banner which was used to promote the event a day before. This only showed to users with Dark mode on under Theme in settings.

The orange banner which was used on select pages to promote the event.

The black banner which was used to promote the event's premiere. This only showed to users with Light mode on under Theme in settings. 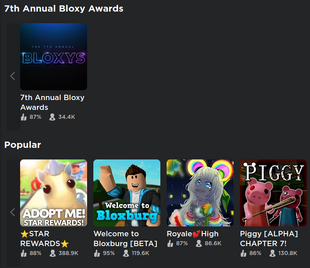 The unique section on the games page.