Start a Wiki
watch 02:27
The Loop (Games)
Do you like this video?
This article is about a discontinued Roblox badge.

Player was earning 6 or more Tickets in the Ambassador program.

This badge is now retired and is no longer attainable.
The Ambassador program was a feature, allowing both free players and Builders Club members to gain more tickets.  The program was released on April 22, 2009, along with the extension of 32 more character and in-game colors.

Players had to post a Roblox link to another website. Each link would award all players 2 tickets per domain.  With three active links, the Ambassador badge would be given. Ever since the feature came out, hundreds of players received the badge, as well as a gift, costing 2000 Robux later on.

A cap was also set for all players to prevent abusing the system. The max was set to 50 links.

On October 14, 2014, administrator Gordonrox24 announced that the ambassador badge would be deleted and removed from all profiles. This choice was met by heavy criticism by the community. 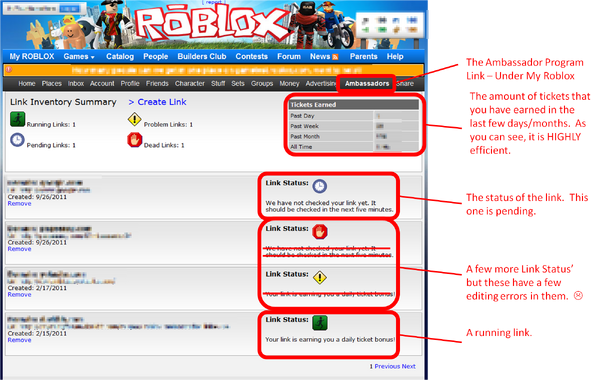 On March 6, 2012, Roblox announced that the ambassador program had ended.

Social Media Manager Taylor Whitmer reported on the Roblox blog, stating that that feature was only used to make profit and had no usage for promotions:

Retrieved from "https://roblox.fandom.com/wiki/Ambassador_program?oldid=670201"
Community content is available under CC-BY-SA unless otherwise noted.