watch 02:45
The Loop (Games)
Do you like this video?
Play Sound
This page needs improvements to meet the Roblox Wikia's standards.
This article needs a complete rewrite or cleanup to meet the Roblox Wikia's quality standards. Please proofread this page and edit this to make it revamped. The specific problems are: Needs adjustments to meet RW:MOS, more citations on ban reasons

A ban is a form of account suspension that can occur when a player violates the Terms of Use on Roblox. Players are typically given warnings on their first few offences, and the number of warnings a user can obtain before getting an actual ban varies.

If the violation is serious, such as phishing, scamming, hacking, or violation of federal law, accounts can be deleted without any prior notices or commands.

Additionally, a player can get banned from an individual game, however this ban is only carried out by a game moderator, not by a Roblox administrator. An admin command plugin is usually used to carry out these bans. This can also happen to any player if a server is locked by an in-game admin or moderator.

Robloxians are unable to view the profiles of deleted accounts. However, a bug on January 15, 2014 gave users access to view terminated account profiles.[1][2][3] According to a forum reply by Merely[4], NobleDragon, a Roblox administrator, made a forum announcement that the bug was an update, but the announcement was later deleted[5], likely to prevent the spread of further misinformation that the change was an update.

Bans can be severe or minor depending on the offence. Users can be banned for different lengths of time.

Users who violate Roblox's Terms of Use will be given one of these reprimands. These can range from in-game bans to permanent IP bans.

This list is incomplete; you can help by expanding it.

Depending on what violation the player has done, these moderator notes, as reported by players, are given to each warning, ban, or account deletion (a comprehensive list of moderator notes can be found on this Roblox Support page

These moderator notes are currently included with bans.

These moderator notes were formerly included with bans. However, they are not currently included.

An "in-game ban", not given by Roblox staff but instead by game owners or players with admin powers within a place, only restricts the player's access to a specific game. These bans can range from being kicked from a server to being permanently banned from a game. If a player is banned from a game, they are usually restricted from access until the server is shut down unless another one is running. Players with in-game bans still have access to the Roblox website, their own places, and other games they can access. This ban will not affect your moderation history.

However, some places may block access to specific players and theoretically ban them; this usually occurs in group-run places with restrictions imposed on other groups or users. A player who is blocked from a game may also be immediately kicked from the server. This can also happen to any player if a server is locked by an in-game admin (you will not have access to the server unless it is unlocked or restarted).

Exploiting is a major violation of the Terms of Service and can result in light or harsh moderation action depending on the severity of the exploit. For this reason, exploiters commonly do their business exploiting on alternate accounts (however this can backfire if the account is IP banned, in which case they may also choose to use a VPN). Due to this evasion method, it is very difficult to capture an exploiter.

However, there are other techniques that developers can use in order to identify exploiters. For instance, on

Shedletsky's Sword Fight on the Heights IV, the game had an unobtainable badge without exploiting, called "Touch The Divine." If a user were to use any form of exploit to grant themselves this badge, that user would automatically receive a ban (most likely an account deletion/termination or most less warning or a ban).

If an account is banned or terminated and has an active subscription to a private server, the subscription will continue after each renewal date as long as they still have sufficient Robux in the account to rent another month of the server, meaning that the banned account will lose Robux. It is unknown whether this will ever be patched.

On July 4, 2018, thousands of accounts on Roblox were banned for "Unauthorized charges/disputed charges" after unintentionally or intentionally receiving a double refund for uploading audio that was rejected. Almost all the bans given were permanent, and Roblox has announced that they are reinstating accounts that were affected (provided that they received a refund unintentionally). This has also happened in 2020.

On March 11, 2018, 10 user accounts were banned due to a bug with a cleanup process banning users using the word “Editor” in the title. This caused groups of terminated accounts to have code leaked.

On October 17, 2018, thousands of accounts received a termination for "Roblox ToS Violation". This ban wave primarily targeted bot users due to scams that were being perpetrated by them, although some innocent users which included known developers and traders were affected as well. All the terminations were given out at 4:51:49 PM.

If the URL "www.roblox.com/not-approved " was accessed (the page the user will always be redirected to when ban/warning is in effect), it would show the last moderation action that the user received. The page would experience hiccups if the moderation action took place before Roblox's font change to the Gotham font. Clicking "Reactivate my account" for a warning on this page will no longer allow you to visit this link, and will redirect you to the homepage.

Accessing this URL "https://www.roblox.com/Membership/NotApproved.aspx?ID= " used to show the same moderation notice but in an older format. Now, it shows a 404 error.

On April 24, 2020 and December 4, 2020, many users received bans of varying time amounts for "exploiting", as a way to target the working practice of exploiting using any Lua scripting exploit, while the December ban wave specifically specifically targetting Synapse users. Whether or not a majority of the users were innocent is debated. Some of the targeted users were banned for using FPS unlockers, despite Roblox's consensus that they are allowed. The ban wave took place between 9:38 and 9:42 PDT in April and from 1:07 CT in December and ended on 10:00 EST.

Ever since 2020, Roblox has not included the violating content with moderation notes. This has caused controversy in the Roblox community since many believe that this is being used to ban people for no reason.

Pretending to be a parent to falsely ban players

In January 2021, people were intentionally misusing the Roblox Support to claim that they are the parent of a player (who the assailant obviously don't know) to falsely ban for numerous reasons, for example, LisaGaming_YT and Parlophones. It is unknown whether or not this Roblox Support issue on pretending to be a parent affects Roblox YouTubers like Flamingo or KonekoKitten or affects users who are 18+.

Users are encouraged to appeal a moderation action through the Support Form, but it used to be through an email to appeals@roblox.com. If the moderation action is deemed to be unfair, it can be lifted. Many users believe that the Roblox appeals system is unfair because appeals have an extremely low return rate, especially for players with less notability or not many connections to notable users.

Roblox has been heavily criticized for their poor moderation on user accounts in the past couple of years. Many people have been upset by this because they have claimed to be falsely banned for no reason at all, whilst contacting Roblox about it just to get a reply saying they could not help.

A rather infamous case of a false ban was when a user named ambusher11 was terminated in February 2020. Ambusher had later posted about his case onto the Roblox subreddit[26], where he stated a user framed him, as the perpetrator filed out a support claim which was typed out in all caps and swear words, asking for Roblox to delete ambusher11. The claim was somehow approved and as a result of that, ambusher's account was deleted. In the comments section of that Reddit thread, many users were disappointed that Roblox had somehow accepted the request, even though it was obviously fake. The post Ambusher made was later deleted by the Roblox subreddit's moderators, as the rules state not to post about user bans. However, KonekoKitten, a YouTuber had saved the post on his Twitter page before it got deleted[27]. Ambusher's account has not been unbanned since then, and might continue to be like this indefinitely.

As there are many wealthy users on Roblox, they can be easy targets for hackers to go for. On January 26, 2021, a wealthy Roblox YouTuber called ImFaire had announced on Twitter he was compromised and lost all of his items and valuable limiteds six days earlier on January 20[28]. Faire had tried e-mailing Roblox about this, and they replied saying they could not help him with the situation because he did not have the e-mail the hacker used to lock him out of his account. Many people have supported him during this time, asking Roblox to unban him and give his limited items back.

Many users who have created new accounts state that their previous account was banned for no apparent or sufficient reason. A glitch on the mobile client occasionally causes the player to see a message that they are permanently banned when they have received no recent moderator sanctions. It is also known that Roblox bots troll or pretend to be a parent asking for some unknown user's account to be banned/deleted, though it has been confirmed that you can no longer request to get your account deleted (a test was hosted and they replied with something on the lines of "We do not have an account deletion request feature for players").

A rumor that spread throughout 2011–2013 noted that moderator MSE6 banned users for no reason. b1tsh1ft has been rumored to ban users who post a topic within the wrong subforum. After b1tsh1ft was fired, the rumor spread to a new mod, EliteEinherjar.

A warning in a different language (old interface)

An account deletion for an inappropriate username (old interface)

An account deletion for an inappropriate username and decal (old interface) 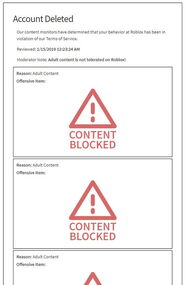 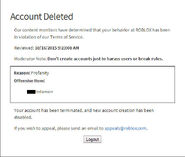 A user banned, presumably by the trader and moderator Merely (old interface)

Retrieved from "https://roblox.fandom.com/wiki/Ban?oldid=1067184"
Community content is available under CC-BY-SA unless otherwise noted.