I'm trying beary hard not to get sick this year.

It features a black mask surrounding the mouth. It has the snout of a bear on the front.

It is the most purchased item of 2018, with about over 2,200,000 sales.[1] It was released about two months prior to 2018. Due to its 'mainstream' popularity as an accessory, it has been stereotyped as an online dater item. 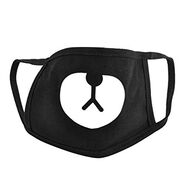 The mask seen in real-life.
Add a photo to this gallery

Retrieved from "https://roblox.fandom.com/wiki/Catalog:Bear_Face_Mask?oldid=944516"
Community content is available under CC-BY-SA unless otherwise noted.