This sword men use to fight angry narwhals... in space.
Crimson Periastron Mu is a limited unique gear published in the avatar shop on November 28, 2012. It could be purchased for 2,000 Robux and had a stock of 300 copies. It is the fifth variant of the Periastron series. As of January 26, 2019, only 216 copies exist and it has been favorited 1,956 times.

It is a sword with a light to dark crimson gradient to the blade and has a red handle with a silver end. The middle features a silver striped guard with a gem in it. It also emits red

When in-game, the user can click once to swing the blade and double click to dash and strike forward, if a player is near, the user will go towards them. As an extra effect, while striking the sword, it will leave behind a trail of light red waves behind the blade.

Pressing Q will summon five red spots on the ground to appear around the user. After a few seconds, the spots will turn into red columns of lasers and spin in a circular pattern around the position of the user whilst converging back into a single column. Any players who come into contact with the lasers are heavily damaged. The effect lasts for a few seconds before going on a brief cooldown. 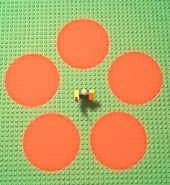 Spots around the player upon activation 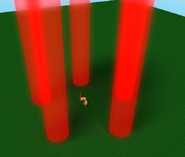 Lasers all around the user

Lasers all in one spot in the position of the player
Add a photo to this gallery
Retrieved from "https://roblox.fandom.com/wiki/Catalog:Crimson_Periastron_Mu?oldid=948435"
Community content is available under CC-BY-SA unless otherwise noted.