The sword men use to fight hippos covered in poisonous snakes... in space.
Ivory Periastron is a limited unique gear published in the catalog on February 28, 2013. It could be purchased for 2,000 Robux and had a stock of 125 copies. It is the seventh variant of the Periastron series. As of January 26, 2019, it has been purchased 125 times and favorited 2,288 times.

It is a sword with a bright white blade with a grey end. The middle features a silver striped guard with a gem in it. It also emits white

When in-game, the user can click once to swing the blade and double click to dash and strike forward, if a player is near, the user will go towards them. As an extra effect, while striking the sword, it will leave behind a trail of white waves behind the blade.

Prior to being updated, the Ivory Periastron had an ability that involved the user spinning around while surrounded by a ring of blue electricity. Anyone that was caught inside of it would be knocked back and took fair damage, leaving a trail of electricity behind them.

Pressing Q will launch a bright white sphere into the sky, which will then proceed to rain down homing projectiles that are able to blind players and KO them in a few hits before exploding as a supernova. It effectively lasts for 15 seconds. This ability can be countered by using shields such as Chartreuse Periastron's forcefield.

Pressing E will create a ghost of the user at the current location that lasts indefinitely, which can be used as an emergency teleport back by pressing E again. 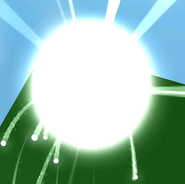 Aftermath of the sphere exploding

Ghost ability
Add a photo to this gallery

Retrieved from "https://roblox.fandom.com/wiki/Catalog:Ivory_Periastron?oldid=867782"
Community content is available under CC-BY-SA unless otherwise noted.