For other items with similar names, see Lord of the Federation (disambiguation).

Lord of the Federation

The wars of unification are complete. The federation is whole once more. All of creation is yours.

Lord of the Federation is a limited unique hat that was published into the avatar shop by ROBLOX on March 8, 2012. It could have been purchased for 250,000 Robux and had only 10 copies in stock. It is part of the Federation series. As of January 30, 2019, it has been favorited 11,237 times.

It is a golden crown with dark blue-colored accents and gems imprinted around the edges, along with a massive sapphire gem in the middle. Four crescents are visible above the edges of the crown. 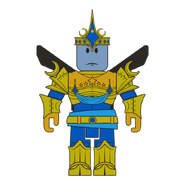 The Lord of the Federation bundle Roblox toy.
Add a photo to this gallery

Retrieved from "https://roblox.fandom.com/wiki/Catalog:Lord_of_the_Federation_(hat)?oldid=933703"
Community content is available under CC-BY-SA unless otherwise noted.