After account creation, all male avatars are given this package, Blue and Black Motorcycle Shirt, Dark Green Jeans, Pal Hair, and Smile.

Users who first joined who are considered "noob/newb" are fine, but people who are older than 3 months and still use this item are considered a "noob/newb" even though they aren't. Many users also thought that LEGO would sue Roblox due to the arms and legs being similar to a LEGO figure.

This package may have caused some RP/Clan/Military/Company groups to discriminate people using morphs (aka 3.0 and 4.0).

A glitch was discovered on June 6, 2016. The glitch would appear as the right leg would be invisible on the avatar.

The most notable person to have this glitch first is Ninjah13 who noticed the body has changed and thought it was a glitch until he saw other users using it. 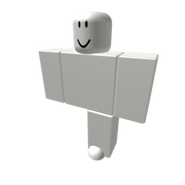 The glitched package as it appears on the catalog. The right arm seems to be thinner than the left arm. It has no hair, the left leg is missing, and the right leg is thicker than normal.
Add a photo to this gallery
Retrieved from "https://roblox.fandom.com/wiki/Catalog:Man?oldid=868590"
Community content is available under CC-BY-SA unless otherwise noted.