Roblox Wiki
Register
Don't have an account?
Sign In
Advertisement
in: Hats, Items obtained with a promotional code, Articles with trivia sections, Crowns

Be the one to wield the power of ice cream sandwiches this summer!
Neapolitan Crown is a hat that was created on May 7, 2019, and was published to the avatar shop by Roblox on July 2, 2019. It is a spinoff of the Domino Crown series and was created for the Barnes & Noble Game On! event.[1] It could have been obtained for free by redeeming the promotional code "BARNESNOBLEGAMEON19". As of May 5, 2021, it has been favorited 117,000 times.

The term "Neapolitan" refers to the type of ice cream composed of three separate flavors being Vanilla, Strawberry, and Chocolate made up of a compound (meaning all combined).

It is a brown crown with a vanilla, strawberry, and chocolate ice cream base in the middle surrounded by three Neapolitan ice cream sandwiches facing upwards on the edges. The shape somewhat resembles a Domino Crown, yet it is bigger then the original Domino Crown mesh. 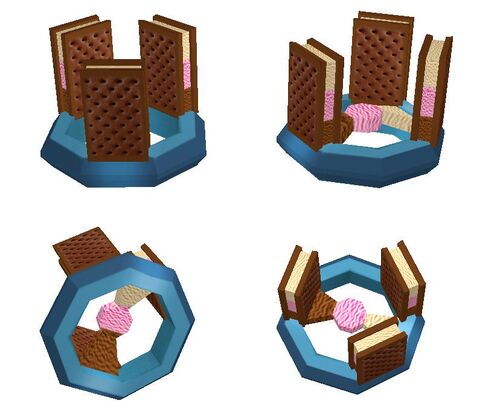 The original version of the Neapolitian Crown, which featured a blue base[3].