Start a Wiki
This article is a stub. You can help the Roblox Wikia by expanding it.

Get this exclusive item when you redeem a code from a Roblox toy! Check out www.roblox.com/toys to learn more...

Rainbow Barf Face is a face that was published into the catalog by ROBLOX on June 1, 2018. It is obtainable by redeeming the code packaged with the "Robloxian Life Clothing Store Billboard Guy" Roblox toy from Celebrity Collection Series 2 Mystery Boxes.

It was originally designed by crazyone95 in January 2014, originally being referred to as the "Rainbow Overload".[1]

Features a joyful face with shining eyes and an uncoloured mouth that is ejecting rainbow colored vomit. 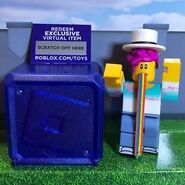 The Rainbow Barf Face, as seen on the toy.
Add a photo to this gallery

Retrieved from "https://roblox.fandom.com/wiki/Catalog:Rainbow_Barf_Face?oldid=865156"
Community content is available under CC-BY-SA unless otherwise noted.