The sword men use to fight angry magical unicorns... in space.
The Rainbow Periastron Omega is a limited unique gear published in the avatar shop by ROBLOX on May 30, 2014. It could have been purchased for 2,000 Robux and had a stock of 100 copies. It is the ninth variant in the Periastron series. As of January 26, 2019, only 86 copies exist and it has been favorited 3,664 times.

It is a sword with a reversed rainbow pattern on the blade. The middle features a silver striped guard with a gem in it. It also emits any color

Sparkles (with the exception of brown) when equipped in-game, only white sparkles appear on the avatar.

When in-game, the user can click once to swing the blade and double click to dash and strike forward, if a player is near, the user will go towards them. While striking the sword, it will leave behind a trail of rainbow colored waves behind the blade. Two additional effects also occur, the first one being that white stars periodically shoot out of the blade of the Periastron and the second one being that red and pink beams strike from the sky and implode around the user.

Prior to being updated, pressing Q created rainbow colored projectiles that could strike other players to deal 30 damage per hit, lasting 10 seconds. The user also gained an increase in move speed when they held the sword.

Pressing Q will summon a large circle of any seven of the Periastrons (excluding Seasonal ones) along with the Rainbow Periastron itself in front of it to appear above the user. Upon activation, the Periastrons rapidly spin in a circle to charge a massive rainbow laser beam which is then fired from the Rainbow Periastron. Any players caught in the beam are instantly KO'd. It lasts for approximately 10 seconds and has a very long cooldown. The appearing periastrons depend on which periastrons you have inside of your inventory. Lets say for example, if you had Noir Periastron Psi, it would appear on the spinning wheel.

Pressing X will create a swirling 2D black hole surrounding the player, sucking other players towards them. It is believed to have a cooldown of around 5 seconds, as it does not last very long and is not very powerful. This requires the Amethyst Periastron to be inside of the players inventory.

Pressing R will summon a medium-sized boulder like hill of rock, killing the opponent if they are trapped in it, and launching the player high up, however not up in the sky. This ability requires an unreleased periastron named "Hazel Periastron" and can be used in a gear testing place. It has a cooldown of 3 seconds. 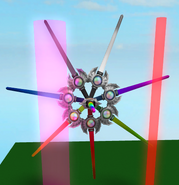 The spinning circle of all of the Periastrons (excluding Seasonal ones) 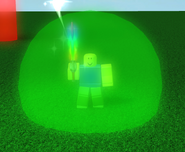 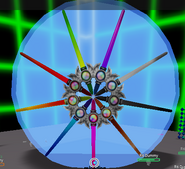 The circle of Periastrons when they are spinning, creating a closed blue outline

A user with the black hole

The Unreleased rock smash ability
Add a photo to this gallery
Retrieved from "https://roblox.fandom.com/wiki/Catalog:Rainbow_Periastron_Omega?oldid=948432"
Community content is available under CC-BY-SA unless otherwise noted.