For the material, see Forcefield (material).

A ForceField (also known as "FF" for short) is an object in a place. It was added on December 20, 2007,[1] appearing as flashing wireframes. It was updated in 2012 as a sparkling ball around a player's avatar, and, in 2014, it was updated to a sparkling blue-colored 3D ball.

It currently appears as a blue orb around a player's avatar, protecting the player from being knocked out by explosions or from most

Tools. However, some things can remove the ForceField and kill the avatar.

SpawnLocation can be inserted into a place, defaulting to appear for ten seconds around newly spawned players. This time can be adjusted to be longer or shorter through the spawn's "Duration" property.

The ForceField will also protect anything with a Vehicle property.

Whether or not this ForceField can be seen. Effects still apply even if the ForceField is visible or not.

Serialization: can save and load.

ForceFields only have an effect when put inside a

Model with a part named "Head". This can be done with the following code in a script:

It is important to note what ForceFields do and do not do. Forcefields do protect against almost all explosions. However, they will not work if used to defend from a badly scripted weapon. Adding a ForceField to a player's character prevents Humanoid:takeDamage(n) from having any effect. However, it does not prevent code such as Humanoid.Health = 0 from killing the player.

The ForceField as of late 2014 to present. (modern-day shaped) 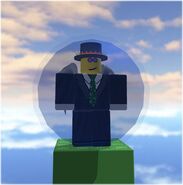 Retrieved from "https://roblox.fandom.com/wiki/Class:ForceField?oldid=928490"
Community content is available under CC-BY-SA unless otherwise noted.