KonekoKittenWasTaken (formerly Siromaru, known on YouTube as KonekoKitten) is a Mexican-American[1] Roblox YouTuber with over 800,000 subscribers. They primarily upload Roblox commentary and gameplay videos.

They currently live in the state of Florida. They have a transgender girlfriend named Ellie, known as miskeeping on Roblox, Twitter, and YouTube. They also have a cat named Zoey. Koneko suffers from depression as a result of gender dysphoria.

Their Roblox account has over 270,000 followers. They own a group named the KonekoKitten's Official Fan Club. Their username was censored on the Roblox website until they requested it to be unfiltered.

On June 19, 2019, they uploaded a Brick Hill gameplay video after discovering it through Google, referring to the game as a Roblox clone and joking about uploading Brick Hill content instead of Roblox content. [4] Soon after the video was published, a co-founder of Brick Hill claimed that the internet traffic had crashed the game’s servers. As an acknowledgment, Brick Hill created the Flower Hat, which was based on their Roblox avatar’s Happy Time Magic Flower Hat. Soon after, they uploaded another video playing Brick Hill and discussed the creation of the Flower Hat. [5] Their Brick Hill gameplay videos ultimately resulted in an increase of 20K Brick Hill players by three days after the videos’ uploads.

They stopped using profane language and inappropriate references in 2018 to widen their fan base to younger children (no longer because of COPPA) They formerly used to upload Minecraft videos on their main channel. Their channel mascot is Ball Cat, which is a round, white stuffed cat dressed in a green-and-white striped t-shirt.

They have a second YouTube channel named Koneko in which they primarily upload Hypixel Skyblock and Pokemon gameplay videos. The channel has over 85,000 subscribers as of May 5, 2020.

On October 29, 2018, they received some backlash from uploading a video[6] about specific special usernames, causing Roblox to delete users such as Мастер and maël4000. Due to this, they responded with a video[7] stating that it was a coincidence that the special usernames were reset at the time of their video.

It is speculated that one user reported the special usernames to Roblox Support in order to reset their accounts. Another possibility is that a Roblox staff member had seen the video and reset the accounts themselves.

After defending WhoToTrus in controversies surrounding UGC, WhoToTrus created the Cotton Candy Bowtie as an acknowledgement.

On April 27, 2020, they discovered a screenshot of lisagaming_yt's video called I GOT BANNED ON BLOXBURG... 😢💔 through various Twitter messages. This prompted them to upload a reaction video to her ban from Welcome to Bloxburg on April 28, 2020.

On May 1, 2020, KonekoKitten uploaded a video of them reacting to her lawsuit, commenting that they were a fan of her channel regardless of her threats. They compared her malicious intentions to Julius Cole's earlier videos.

On an unknown date, their group and followers were botted. It is speculated that a user had attempted to frame them for using bots.

On another unknown date, a user botted their audios in an attempt to ban their account due to uploading a controversial video which uninintentionally ended up in the deletion of accounts with rare usernames. The user is also speculated to have been involved in spreading false claims about them online, such as them supposedly speaking a racial slur without proof.

An unknown user attempted to expose them through the Roblox Fandom wiki for swearing and violence, despite them avoiding swearing in videos since 2018 and their videos showing cartoon violence, which is considered appropriate for children.

On March 26, 2019 at 6:31 AM EST, an anonymous user hacked into their Roblox account and disabled two-step verification. They quickly regained access to their account and uploaded a video [8] explaining the details of the incident.

Picture of KonekoKittenWasTaken in real life. 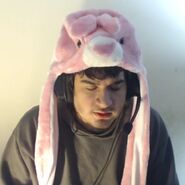 Picture of KonekoKitten in real life, wearing a pink hat.
Add a photo to this gallery

Retrieved from "https://roblox.fandom.com/wiki/Community:KonekoKittenWasTaken?oldid=957905"
Community content is available under CC-BY-SA unless otherwise noted.