Welcome to the Town of Robloxia

The game faced a slow decline ever since the termination of 1dev2's account and was having trouble reaching at least 50 users daily. The original version on 1dev2's account is now under review and is no longer playable.

The Rise and Fall

Originally built in January 2010, the game is based in a small town called Town of Robloxia. It has a police station, a fire station, a medical clinic, and other industrial and commercial private companies. Such companies include a tower, a fire station, a gas station, a factory, a mall, a small airport that is only for VIP, a school, and a news HQ.

On June 14, 2012, the game has changed to the starter map because Jaredvaldez4 stole WttToR and put it in one of his game slots. This version of the game hit the front page. On June 29, 2012, the place was changed from a starter map back into the original game, and it was made uncopylocked, leading to the game being copied and stolen by many users, such as Jaredvaldez4 and JuliusColesV2. It is unknown who did this, but many users say a site staff member set the game back to normal.

1dev3 also brought back Robloxity (A similar styled, city), which will also be updated.

As Roblox evolved, Robloxia did too. It all started with a simple game, 'Welcome to The Town of Robloxia' created by 1dev2. Fortunately, the creator refrained from copylocking the game. Many users have copied the game and added updates to bring back the memories but in the modern style. Updates have been added such as; more cars, more buildings, more jobs, better house, longer roads, etc. Majority of these copied games are called, "Get a Job, Buy a House, Be Rich!", "Adopt and Raise a Cute Baby". However, all these games contain the same core map style.

An example of stardon's Town of Robloxia HD (circa Dec 2017)

A player driving a truck in WttToR. 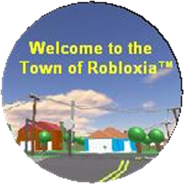 The badge everyone got for joining. Badge title: "I visited 1dev2's Town of Robloxia!" Badge Desc: "Simply join to recieve badge!"
Add a photo to this gallery

Retrieved from "https://roblox.fandom.com/wiki/Community:1dev2/Welcome_to_the_Town_of_Robloxia?oldid=945989"
Community content is available under CC-BY-SA unless otherwise noted.