Around 2,000FLAG::SUSPECTED_NCU
Not to be confused with Minish.

Aminish was the alternative account of Scripter, a Roblox Ex-Employee who was known for leaking videos of the Sparkles feature to his YouTube account before it was implemented into Roblox. The main purpose of his account was selling in-game money and developing clothes, creating games, places, meshes, scripts, and others.

It is known that Aminish was terminated a few days after messing up the RAP (Recent Average Price) of some of the Dominus items in the catalog. See Gallery

Aminish also used to own a group called The Genovese Crew, it is rumoured that he used it to save the money he "generated". After his termination, the ownership of The Genovese Crew was given to one of Aminish's friend named Bot_Link.

Aminish's value at one point, statistics are provided by a third-party website. 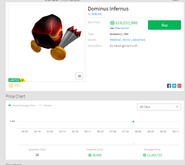 Dominus Infernus messed up by Aminish
Community content is available under CC-BY-SA unless otherwise noted.