Adventure
Accurate as of Jan 13, 2021
Super Nostalgia Zone is a Roblox game developed by CloneTrooper1019. It simulates the older game engine of Roblox, mainly focusing on the 2006-2008 era with a few extra bits and pieces from 2009–2010. Super Nostalgia Zone features 31 old Roblox games, with more coming soon.

The game allows the player to wear old shirts, pants, faces, T-shirts, and hats with the in-game currency "Tix". Tix is earned daily in amounts of 10, which is very similar to how Tix functioned.

Four special hats can be obtained in the game are:

They are earned by completing replicas of old event places from 2008 and 2009 respectively. However, they can only be obtained during October because they are Halloween-themed. (Note: when player acquire these hats, they will only give players them in-game, meaning it doesn't give players these items on the Roblox site.)

This is a list of all the current 29 Super Nostalgia Zone games, in alphabetical order.

Balance is a game by admin "Matt Dusek". The aim of the game is to fight other players on a baseplate, with a Superball. The Trowel is used for defense.

Chaos Canyon is a game where players have to fight with BrickBattle tools. Unlike most BrickBattle games, the map is larger and has a Wild West theme.

This game is about building structures with tools such as the Move Tool. The map has a blue river.

This game is an original BrickBattle game created by the user ROBLOX.

Dodge The Teapots of Doom!

The aim is to dodge teapots to avoid getting killed. When players complete it, players spawn on a platform. Made by clockwork

This game is a place where players build around the house. This also used to be the starter house in 2010–14.

This game is similar to other BrickBattle games, but all the tools are more Halloween-themed.

King of the Hill

The aim is to capture the hill and become the 'king' by sitting on a chair to get the crown. The king has to throw boulders to stop the other people (peasants) from killing the player.

This game is where players play minigames, similar to Person299's Minigames. Examples of minigames are Iceberg Stomp, Race to the Flag and Red VS Blue Soccer.

This game is about exploring 'mini' structures.

This game is about exploring different places, similar to Mini Robloxia.

This game is about fighting opponents with Pinball Guns.

This game is an event from 2009 where players have to find treasure chests.

This game is a BrickBattle game where players have to fight near a fictional Roblox HQ.

This game is another BrickBattle game where players fight with rocket launchers. Jetboots and trowels are also included.

This game is similar to Rocket Arena, except it also has a superball and a sword.

In this game, players fight with BrickBattle tools over several maps.

Sword Fights on the Heights IV

This game is a sword fighting game created by Shedletsky. There are a multitude of swords scattered across the map, and each sword has its perks.

In this game, players have two tools: the swuvel and the sniper. Players have to use these to dig tunnels and fight the opposing team. They will also have to try and capture the opponent's flag.

This game is a roleplay game situated in a fictional town called Thrillville.

This game is where players have to fight the opposing team with paintball guns.

This game is similar to the ROBLOX Halloween Treasure Hunt where players can also gain items.

This is where players can buy 'Tix' with real Robux. This will show the prices for buying each amount of 'tix':

Nostalgia Club is Super Nostalgia Zone's version of Roblox's Builders Club. It costs 500 Robux per 30 days. The description on the game says: "With Nostalgia Club, your daily login is increased to 250 tickets a day, and players get a hat to keep. Players also receive a complementary 1,000 tickets for free.".

The settings page can change the aesthetics and performance of Super Nostalgia Zone.

This setting will toggle the in-game music.

This option toggles bevels. Bevels were the smooth edges on bricks that were removed in 2013.

This setting enables the classic click to move feature, removed in 2012.

This setting toggles the Follower Camera. The camera will follow the player's character, as opposed to it being free moving.

This setting toggles pre-2008 explosions, which were simple red spheres.

This setting toggles the old sound bug that would occur whenever a sword was equipped.

Turn shadows on or off.

Description: "This badge is given to any players who has proven their combat abilities by accumulating 10 victories in battle. Players who have this badge are not complete newbies and know how to handle there weapons."

Description: "This badge is given to the warriors of Robloxia, who have time and time again overwhelmed their foes in battle. To earn this badge, you must rack up 100 knockouts. Anyone with this badge knows what to do in a fight!"

Description: "Anyone who has earned this badge is a very dangerous player indeed. It is given to the warrior who have bloxxed at least 250 enemies and who has tasted victory more times than he or she has suffered defeat. Salute! Those Robloxians who excel at combat can one day hope they will achieve this honor, the Bloxxer badge.

​​​Description: "This badge is awarded to players who have invited 3 friends into a single game session."

Description: "This badge is awarded to players who encounter a friend in-game over 10 times. Note that players don't have to encounter an individual friend 10 times, the counter just increases for every friend that the player encounterd in a game."

Description: "This badge is awarded to players who visit every single place in Super Nostalgia Zone."

The avatar page will allow player to change their body color by clicking on the part they want to change. Players can also wear any T-shirt, by putting in the AssestId of the T-shirt, image, or decal. There are also some pre assorted T-shirts.

The Catalog page is right below the avatar page. Players can browse and buy various hats, shirts, pants, and faces. Players can also search for the said items using the search bar.

The following table will show the list of hats and their prices.

The following table will show the shirts and their prices.

The following table will show the list of pants and their prices.

The following table will show the list of faces and their prices.

The Games page shows all of the available games, as well as how many players there are, and how much servers are active. It also gives the player the option to create a solo server that friends can also join which is very similar to VIP Servers except in the older versions of Roblox.

The following interview was between Thundermaker300 and CloneTrooper1019 on Jul 15, 2019, as part of the Developer Connections Project.

What was it like developing Super Nostalgia Zone?
What challenges did you have to overcome while developing? What was the most challenging?
Ironically enough, the challenges I ran into revolved around accurately replicating how gimicky and awkward Roblox felt to play back then. Super Nostalgia Zone's mechanics clash heavily with Roblox's more modern polish, and a lot of the time I found myself having to reimplement lots of features and mechanics that either no longer existed on Roblox, or no longer behaved like they used to. The key focus for me was accuracy and attention to detail. I tried to replicate every minor quirk and feature I could observe, striking a balance between authenticity and user experience. Every feature and mechanic in the game has a meticulous amount of detail put into it. From accurately emulating how the old character animations felt, to the explosion and forcefield effects, the user interface, camera, controls, cylinders, humanoids, lens flares and skybox, really everything in the game is something that I put a lot of attention to detail into, and I'm quite satisfied with how everything has turned out.

The biggest challenge by far was the restoration of Roblox's bevel feature. This is something that I introduced fairly recently, and it required me to do things that I feel confident saying no Roblox developer has ever had to deal with. I wrote an external program that would procedurally generate bevel meshes for me, and these meshes would be turned into MeshParts which I would then batch into .rbxm files that I could load into Roblox Studio. Bricks in the game are swapped out at runtime with these bevel parts, so I had to adjust a lot of existing code in the game to compensate for these new constraints.

I ended up adding write support to a C# library I had written earlier in the year to accomplish the automation of this task. There were a few other attempts I made prior to arriving at the procedurally generated MeshPart solution (such as utilizing the in-game CSG API and having a custom LOD system written in Lua) but I'll spare you the details as it would take up several more paragraphs for me to explain all the hiccups and issues I ran into getting this all to work. Solving challenges like this is the kind of thing I live for, I love to push boundaries and using newer Roblox technology in ways that were not expected.
What did you enjoy most while developing Super Nostalgia Zone? 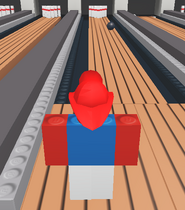 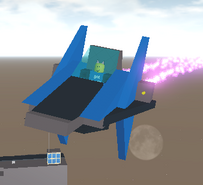 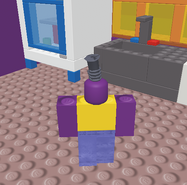 Exploring the Haunted Mansion
Add a photo to this gallery
Retrieved from "https://roblox.fandom.com/wiki/Community:CloneTrooper1019/Super_Nostalgia_Zone?oldid=1046594"
Community content is available under CC-BY-SA unless otherwise noted.