Erik S. Cassel[1] (December 16, 1967 – February 11, 2013), known on the platform as erik.cassel, was a co-founder, administrator and former VP of Engineering on Roblox. He was fairly active on the website but rarely played any experiences. Erik passed away due to him losing his fight with cancer on February 11, 2013.

On February 11, 2013, the Roblox staff stated on the Roblox Twitter account that Erik Cassel had "lost his fight with cancer" earlier in the day at the age of 45.[2][3] Keith confirmed it in the late hours in a forum post.[4] A blog post was then created later in the day.[5]

"To honor our co-founder Erik Cassel, Roblox will make a substantial contribution to cancer research in Erik's name. Thank you to everyone for your respect and support."

In May 2014, erik.cassel was online, shocking many users. Some said that he was hacked by an unknown user, and others said his younger brother or his sons were using his account. His kids using the account is generally the accepted explanation.

A shirt Roblox created in memory of Erik.cassel. 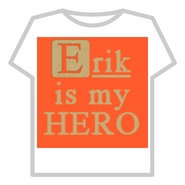 A T-Shirt that was created a day after Erik's death.