All
Accurate as of Oct 12, 2020
ROBLOX Battle is a BrickBattle game created by the Roblox content team on November 1, 2012. The game has a plethora of game modes and various maps that the game mixes together at random to provide a fresh experience to returning players. There is also a wide selection of armor, a small amount of which is user-created. The game serves as an enhanced version of Crossroads, using updated versions of the weapons seen in the game.

On June 10, 2013, the Roblox content team released the Major Update. In this update, Roblox added support for new "game types", including Elimination Mode, Party Mode, and Rocket Race. Additionally, new maps, such as The Shard and Raven Rock, were added for players to fight on within the new game modes. A new lobby was built, which included a voting area, a spectator overlook area, a shop, and a bank. Through the bank and the shop, users could use the newly added Coins, which would drop each time a player was KOed. The update, which was heavily advertised, launched the game onto the front page for several days after months of inactivity. Other updates, which built onto the new features from the Major Update, released one month later.

The Roblox content team later released a three-part blog post about the game and how it was made, detailing how the game is powered and how they modeled the game. In their third blog post, they announced the game was officially uncopylocked so users could see how the game was created and create their own versions of the game. The game had a protective script that prevented users from getting the maps originally used in the game, but users found a loophole to bypass the safeguard. Although this allowed users to get the maps, they would not appear in Studio Mode.

In 2018, the Nexus Development created their own modern version of Roblox Battle, which greatly builds on the ROBLOX Battle format and foundation through new features and shop items.

Five of the six gears available in ROBLOX Battle, those being the Linked Sword, the Bomb, the Slingshot, the Superball, and the Rocket Launcher, are remakes of those used in Crossroads. Some of the modernized gear received and replaced old features. For example, the bomb is thrown at a targeted area instead of dropping on the player's head, making it less risky for an accidental suicide when using the gear. Additionally, the bomb projectile flashes red and is in the shape of an actual bomb rather than a chrome sphere. A new gear, the Reflector, is introduced in ROBLOX Battle. This device briefly deploys a reflecting forcefield that reflects projectiles, including superballs, slingshot pellets, and rockets. The forcefield can reflect one's own projectiles, so anyone using it should be careful to not self-destruct.

Coins are the in-game currency used to purchase different pieces of armor in the shop. Each time a player dies, about five coins will spawn from the top of their head. Coins will not drop on self-destructs. More coins will spawn if the killer is wearing special armor. Players can earn coins from fighting in each round, but they are not saved unless they are put in the Bank, which is located in the Intermission Lobby. Players can use these coins to buy items from the shop. 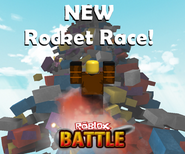 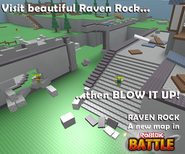 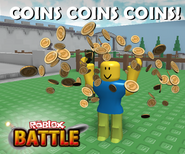 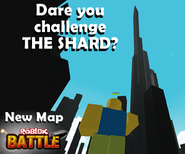 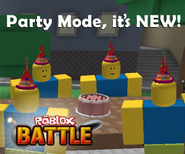 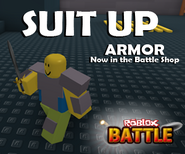 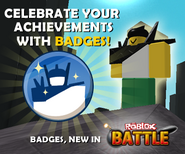 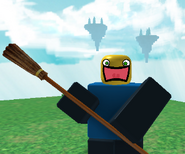 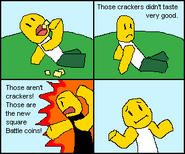 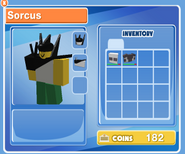 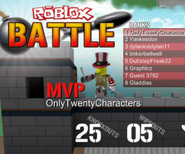 "Do you even STATS?" 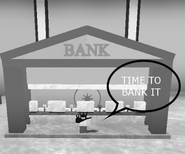 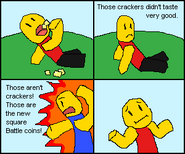 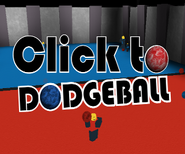 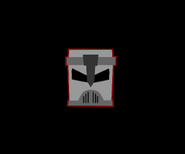 "dominate."
Add a photo to this gallery 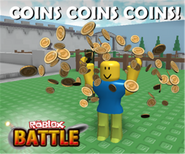 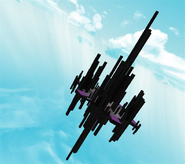 Another version of the thumbnail used to showcase the map used in the Rocket Race game type. This version, however, has a mix of colored blocks and grey blocks, whereas the other thumbnail only has red and grey blocks. 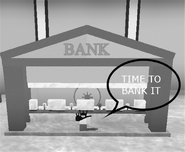 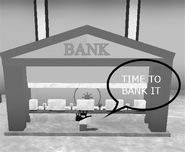 Retrieved from "https://roblox.fandom.com/wiki/Community:Games/ROBLOX_Battle?oldid=1023920"
Community content is available under CC-BY-SA unless otherwise noted.