Accurate as of Jun 20, 2020
Lizzy_Winkle (October 17, 2004 - November 29, 2019) was a Filipino-American artist on Roblox who was most notable for her heavy contributions to Royale High, being a well-known figure in the game's community.

Lizzy also created a lesser known game, Christmas Halo❄☃, which accumulated approximately 504,380 place visits before being closed on February 5, 2019. Some popular items she created for Royale High are the Star Scepter, Assorted Flower Crown and Wild Roses Wings alongside many other accessories.

On the morning of November 29, 2019, Lizzy_Winkle passed away after a long battle with acute lymphoblastic leukemia[1], or blood cancer. Her death was announced by her sister Mae on Twitter.[2] The creator of Royale High, callmehbob, also posted on Twitter.[3]

Later in the day, LauncelotHandsome (callmehbob's husband) started a fundraising live stream for St. Jude Children’s Research Hospital, dedicated to cancer research. By the conclusion of the stream, $17,753.68 was raised for cancer donation.

Another developer of Royale High, Kateka22, said shortly after callmehbob's tweet that they would be organizing a memorial due to Lizzy's contributions to the game.[4] This memorial game was released on December 1, 2019 as "In Loving Memory of Lizzy_Winkle" on callmehbob's profile. In the game, users can walk around the memorial, and write a message with a flower of their choice, to pay respects. The memorial quickly reached the front page, and was subsequently visited by users from all over Roblox. A smaller memorial inside Royale High's "Earth" realm was added that teleported to this game if interacted with. 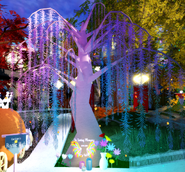 Lizzy's memorial tree inside Royale High.
Add a photo to this gallery

Retrieved from "https://roblox.fandom.com/wiki/Community:Lizzy_Winkle?oldid=951042"
Community content is available under CC-BY-SA unless otherwise noted.