Sci-fi
Accurate as of Jan 16, 2020
Ro-Bio 2 was a scientific experimentation game created by MemeNicoi. It was a direct replacement for the original Ro-Bio, with certain features watered-down in order to make the game less disturbing. It was soon taken under review and now serves as a redirect to the game's third iteration, Ro-Chanics.

Ro-Bio 2 was an altered version of the original game and as such followed exactly the same gameplay, however there were some tweaks made as a result of Roblox's reasons for deleting Ro-Bio:

A third version known as Ro-Chanics was announced shortly after Ro-Bio 2's closure, and can currently be played.

View of the map layout from underneath 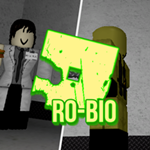 Ro-bio space's thumbnail
Add a photo to this gallery
Retrieved from "https://roblox.fandom.com/wiki/Community:MemeNicoi/Ro-Bio_2?oldid=850389"
Community content is available under CC-BY-SA unless otherwise noted.