Not to be confused with Aminish.

Minish was a Top 100 Forum Poster, famous Roblox developer, forumer, and brickbattler whose account was terminated in 2009. Their account, as well as numerous others, were temporarily unbanned during the April 1, 2012 hacking incident in which they allegedly were framed. Minish was also one of the winners of the ROBLOX Rox Music Video Contest and the Winter Wonderland Contest.

Minish was a former well-known "troll" on General Discussion (aka Roblox Talk) from the summer of 2008 until their termination in late 2009. They were believed to have owned the account "Diana", but this has remained unconfirmed. Diana, however, was indeed a stolen admin account from 2005 but it is unknown if Minish once owned or had access to the account or not.

During their time on Roblox, Minish was known to be a talented builder. They had even gained the Ice Crown from a Winter building competition and shortly after received the Red Banded Top Hat from their game Shrine Of The Fallen Hero.

Minish was also involved with the sword fighting community as they were seen often playing games such as Fencing and Bridge Sword Fight before their termination.

Minish was terminated on an unknown date in 2009 for undisclosed reasons. Some believe this was due to a feud between a Roblox Moderator while others believe it was due to Minish allegedly purchasing the account "Diana." Neither of these have been confirmed although Maelstronomer has claimed that the Diana allegations were true.

During the April 1, 2012 incident, Minish's account was unbanned and used as a "puppet" account. While the account was compromised, the account purchased a Domino Crown from Merely for 12,000,000 Robux. After the incident, rumors grew that Minish was not a puppet and that they were intentionally involved in the incident, which was untrue. 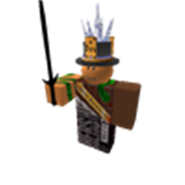 Minish's avatar during the 2012 incident.

A banner pinning the blame on Minish
Add a photo to this gallery
Retrieved from "https://roblox.fandom.com/wiki/Community:Minish?oldid=880280"
Community content is available under CC-BY-SA unless otherwise noted.