Bee Swarm Simulator Wiki
This game has a dedicated wiki project hosted by Fandom that is part of the Roblox Interwiki Project and provides more information about the game.

Bee Swarm Simulator is a simulator game created by Onett. Players grow their own swarm of bees, collect pollen, and turn their pollen into honey to purchase in-game items. NPCs (or bears) are found around the game to give players quests. There are various types of bees to be discovered and many can only be attained by events, completing quests, or with other methods. There are power boosts that you can receive by finishing quests given to you by the NPCs or by searching the maps. These boosts can level up bees or turn them into a different type of bee.

The following interview was between Thundermaker300 and Onett on Error: Page "User blog:RBLXDeveloperInterviews/Onett: Bee Swarm Simulator" does not exist., as part of the Developer Connections Project.

What was it like developing Bee Swarm Simulator?
Fun and refreshing. I had been working on my own game engine for years and to just be able to jump into making a game with an already fully-realized game engine that handles tons of the hard stuff for me (physics, rendering, networking stuff) was something completely new for me. I loved being able to see a game quickly come together and have my doodles come to life.
What challenges did you have to overcome while developing? What was the most challenging?
The most obvious hurdles were learning Roblox Studio and Lua, which all things considered weren’t too challenging. Lua is an easy and flexible scripting language and I’d imagine anyone with programming experience could pick it up fast. I’d say the hardest thing was probably keeping feature scope in check and setting hard deadlines for myself so that Bee Swarm Simulator could just release fast. It was my first Roblox game and I had no clue if I could realistically make money on the platform, so I didn’t want to invest more than 3-4 months into development. And building in general, I had never used any sort of 3D modeling software and even though BSS’s building is simple, I still struggle to put the crudest stuff together.
What did you enjoy most while developing Bee Swarm Simulator?
How quickly you can change stuff around and test the game. I love tweaking stuff then hopping right in and seeing it come to life. Programming the bees and seeing them reach a point where they felt animated and pet-like was a ton of fun. I had fun drawing bees, creating songs, writing lines for the bears, and doing all those different little things that help establish a cohesive tone to the game. And I’m a programmer first and foremost so even though it’s a pain at times I had fun scripting the collection system, the monsters, the bees although I had less fun coding the UI cause it’s a real pain. I also loved having my friends help me test it out, I had never had testers play something I made before and it was just very rewarding to see someone genuinely have fun / get hooked to something I made.

Is there anything else you'd like to share?
Hmm, I guess just how much Bee Swarm Sim has changed my life. I went from struggling for years to put my own games together to quickly producing a game and making a living off it in just a few months, all due to taking a chance on Roblox (which I was skeptical about at first). I also went from living a very quiet and almost hermit like life to having to communicate online with hundreds/thousands of people on a daily basis. Still seems unreal and it can be exhausting maintaining and updating a popular game but I’m just so thankful it happened. BSS is practically all I think about now and even though its just been 6 months I can hardly imagine life without it.

Players who are members of the Bee Swarm Simulator Club get access to additional perks, such as access to certain dispensers and exclusive codes. The group has over 11 million members. An example of one of the buffs is a speed buff found near spawn.

Once players spawn into the game for the first time, a brief tutorial describes the basic mechanics to play the game. Everyone receives a Basic Egg to start their own swarm of bees. Players use a collection tool and their bees to collect pollen from fields. Once their pollen bag is full, they can convert the pollen into honey. Honey can then be used to purchase more bees, larger bags, more efficient collectors, accessory items to boost the player and hive.

As a player becomes more experienced, they can attempt to change their Basic Bees into more specialized bees using Royal Jelly. There are six types of bees with varying levels of rareness. Certain bees, such as Event Bees, can be purchased cheaper during a specific event time frame. Almost all bees have the capability to drop Ability Tokens, which can be used to boost pollen collection, damage, loot luck, etc..

NPCs around the game give players the opportunity to complete quests for a variety of prizes, such as honey, eggs, consumables, and potential enhancements for their swarm. Certain NPCs are available for a limited time and can give players early access to special items or bees.

Mobs are hostile creatures that will attack players to try and kill them. Some mobs defend certain fields, such as the Ladybug in the Mushroom Field. Others are for challenge purposes, like the Stick Bug Challenge. All mobs except ants can drop loot, with mobs with higher difficulty typically dropping more in quantity and quality.

The King Beetle - A boss in BSS 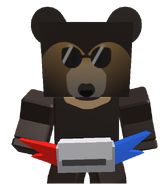 Sun Bear - A traveling bear who awards boots, belts, and other rewards

One of The Mountain's fields in the game, the Stump Field

Royal Jelly, an item in BSS used to change bees into different bees.

Bear Bee. A bee that can be bought with 800 Robux.

Strange Goggles. An item that can be bought in the initial (noob) shop. It's required to complete one of the Ready Player Two quests.

the Honey Dispenser, a dispenser near the spawn that can be used to get extra speed and honey (money). It can only be used if the player is in the Bee Swarm Simulator fan club.

The thumbnail advertising the toys before they went on sale.