Fighting
Accurate as of Feb 23, 2021
Chaos Canyon is a BrickBattle fighting game created by Shedletsky and published under the ROBLOX account. In collaboration with Roblox players, the game features community-created models from users such as PilotLuke, tingc222, and Yahoo. Chaos Canyon is one of the first games created on Roblox.

Although a popular game during its prime, it did not see the same success as Crossroads and Rocket Arena.

There is no specific objective of the game, although it is almost always used as a free-for-all BrickBattle arena.

The tools in the game contain standard BrickBattle weapons.

The game was first created in 2006 by Telamon (who is now known as Shedletsky.) . It features buildings created by PilotLuke (Stealth Pilot), tingc222, and Yahoo.

In 2011/2012, the game was revamped with new material textures on the bricks and a new color palette.

As of 2017, the game is inaccessible for unknown reasons and automatically shuts down upon joining.

Ruins of what appears to be a golden ancient temple, inside is body armor. When touched it will double the users' maximum health.

An Aerial view of the map.

Two towers with a large staircase in front.

A view of the graveyard.

A farther view of the ancient temple.

A view of a large tower with the famous "Santa" sign. 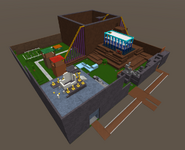 Chaos Canyon as it appears currently.
Add a photo to this gallery
Retrieved from "https://roblox.fandom.com/wiki/Community:ROBLOX/Classic:_Chaos_Canyon?oldid=1057329"
Community content is available under CC-BY-SA unless otherwise noted.