All
Accurate as of May 16, 2020
Roblox Video Streaming – Technical Test is a Roblox game that was created by the test account, RobloxNewTechTest on February 28, 2020. The game was opened to the public on the next day, February 29, 2020, at 3:00 PM EST time. It was used by Roblox staff to test out the brand new in-game video streaming feature with large amounts of players. It also had its own section on the games page and a banner on every Roblox link (excluding the game's page) asking users to help test the feature out. An exclusive item, Lil’ Vernon the Red Dragon, was awarded to users who gave feedback to the feature in-game. The full 6th Annual Bloxys live stream was used to test the in-game video streaming feature, which was shown from a large TV within a theater.

The game quickly received over a million place visits within an hour of it being made public and announced on two different site banners. The feedback on the game was relatively positive, despite the video's quality being poor for many users. Upon it becoming public, it surpassed 80,000 concurrent players. As of February 29, 2020, it has been favorited 44,501 times.

The game was somewhat criticized by the Roblox community for not leaving out the part within a segment of the full 6th Annual Bloxys live stream where the promotional code for the Showtime Bloxy Popcorn Hat was revealed. It was criticized specifically for the promotional code ($ILOVETHEBLOXYS$) not being active and causing confusion among some of the community, as it would have made sense for the part to be cut out or the item to be obtainable again (less likely).

The white banner which was used to ask users to test the feature.

The orange banner which was used to ask users to test the feature. 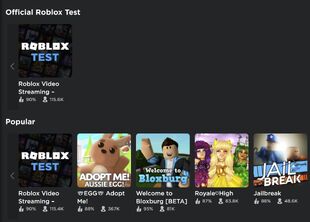 The unique section on the games page.
Add a photo to this gallery
Retrieved from "https://roblox.fandom.com/wiki/Community:RobloxNewTechTest/Roblox_Video_Streaming_%E2%80%93_Technical_Test?oldid=922787"
Community content is available under CC-BY-SA unless otherwise noted.