He is one of winner of the Winter Wonderland contest[1] and Spring Block Party[2]. 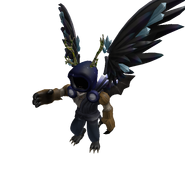