Roblox Wiki
Register
Don't have an account?
Sign In
in: Player-owned games, 2008 games, Pages that need to be improved,
and 3 more

Natural Disaster Survival is a round-based survival game created by Stickmasterluke. It is one of the oldest and most popular disaster survival games on the platform alongside Survive The Disasters. The game was an empty place slot until around November 2011 when the name was updated to "Disaster testing". The full game was released on December 4, 2011.

In the game, players must survive through 12 various disasters on 21 preset maps spawned on a green elevated island that is used for every round.

On 25 February 2020, the game surpassed one billion visits.

When players enter the game, they will be greeted by a welcome GUI and spawn on a tower. On the spawn tower, they can observe the disaster striking the island safely from a distance while waiting for the next round.

When a round starts, a random map is chosen and players will be teleported to the island. Upon arrival, players have approximately 30 seconds to prepare for a random disaster that is not revealed to the player until it starts. If they survive the round, they will be sent back to the spawn tower and their usernames will be shown on the survivor list GUI which appears at the end of every round.

To increase the challenge, a fall damage script is present to damage players if they hit an object from a high distance. If the player stops accelerating, the script does not harm the player.

If the player died during the round, they will be sent back to the spawn tower until the next round.

These are the available disasters in Natural Disaster Survival:

These are the 21 available maps in Natural Disaster Survival.

The Start of Fire disaster on a map is an object, which in the event of a fire disaster, would be the first brick to catch on fire.

The neon brick(s) that are on fire are the Fire Starters in the images.

There are 3 tools in the game that can be obtained from gamepasses. Each gamepass costs 80 Robux. The exception is the compass which could also be obtained from Mysterious Golden Gift in 2017.

Green Balloon lowers players' gravity, allowing them to jump higher and receive less fall damage. But if they use it while on very high ground (e.g at the top of the twin tower in Modest Headquarters), the balloon will pop and become unusable temporarily. It is extremely useful or even necessary if flash flood or tsunami is the selected disaster.

Red Apple heals the player once they bite it, and there is a 5.5 second cooldown so they have to wait for a short time to use it again. This is extremely useful on blizzard, acid rain and deadly virus which are the disasters that deplete players' health over time.

The compass, which can be either bought from a gamepass, or obtained from a Mysterious Golden Gift, is the third and final tool in the game. The function of the compass is simply for players to vote 1 of 3 maps presented by the system. The map with the most votes will be selected to be the next map. If there is a tie in the voting, the system will select one of the maps with tied votes randomly. One specific map can be duplicated, or even tripled. If said map is tripled, it gives no choice to the player on what the next map will be.

There can only be maximum of seven disasters at once. If the machine is powered more than six times, the remaining power-up will not be consumed and will be left for the next multiple disaster round.

The following 23 badges are available to obtain in Natural Disaster Survival:

The following four badges are discontinued badges in the game:

There have been, and still are, multiple significant glitches presented in Natural Disaster Survival; some glitches are currently patched and no longer work.

There used to be a way for the player to forecast the disaster that is about to occur without looking for clouds. Very few players have worked this method of forecasting out and it is quite complicated to attempt the trick.

However, possibly due to the creator discovering this method himself, the stats menu was removed entirely in October 2014.

If the disaster was a blizzard, a sandstorm, a tsunami, or acid rain, there was a trick in which the player could survive while standing completely still at the spawn point on the map (also known as immunity by some members). To carry out the trick, the player had to simply join the server and stay at the spawn point when they teleport to the map. This trick worked anywhere where the player spawns on any map, but worked far better at the back of the crowd since players usually run away from the spawn point, as a group, towards other places on the map. The point of the glitch would be defeated if another player were to run into the player carrying the trick out, knocking them in any direction, even if only slightly, or if the player accidentally pressed a button and moved. Rather than moving about, the player should wait for any obvious sign of the disaster to begin (for acid rain, the early wind sound, the blizzard having the white lining to the cloud and the sandstorm having sepia lining on the cloud), and let the disaster happen around them. While the screen did become slightly foggy or dusty depending on the disaster, the snow or sand particles didn't appear on the screen, and the player didn't take damage from the disaster. If the player was not present at the time of the disaster (being 'away from keyboard'), the bug allowed them to survive most of the time. The chances of this working were slightly higher in a blizzard than a sandstorm, which in turn is more likely than in acid rain. However, this glitch was patched in November 2017.

This glitch happens when a player jumps on a brick, and when they got off the brick, the player would die instantly, even though they didn't jump from a high place. The glitch gets worse when the player is equipped with a balloon. The best way to avoid this is to stay away from debris and jump on an area with no bricks around and avoid using balloon.

Rarely, loads of pieces combined together during an earthquake can cause a whole flying object due to Roblox physics, as the island movement shakes too many blocks at once.

Sometimes, the volcano disaster clogs up the volcanic crater due to lag, which could be dangerous if the clog explodes and cause catastrophic damage in a short amount of time. However, this glitch usually happens during a multi disaster involving Volcano.

When this bug happens, the player will not teleport back to the lobby. In this glitch, players must be sitting on any type of seat when the round ends (ex. sitting on the seat of a racecar, sitting on a beach chair, etc.). When the list of survivors appears on the screen, they will be back to their natural standing position while still being on the map. During this time, the next map will load and the player will still be on the island.

There is a way for a player to stay on the map and not get sent back to where everybody else teleports at the start of the round. To do this, they must be sitting down, waiting on the island while the next map loads. Before everybody else spawns on the map, the player should go to a place on the next map where there are seats and sit down there. If the player does not reach a chair before the map is loaded, they will be sent back to the spawn point of the map, along with all other players from the lobby. Keep in mind that there's about a 5-second window of time for one to find a chair on the next map while waiting for the map to load.

Some of the maps are made by players instead of the creator himself, implying everyone is allowed to create their own map.

If players wished to build their own map, take the kit first.

After finishing the map, it needs to be uploaded as a free model. Make sure the model name contains "NDS map for Stickmasterluke".

Even though the map is published as a free model, it does not mean the map must be taken by Stickmasterluke. And it also does not mean Stickmasterluke must use the map if he has taken it. There are many maps made by the community and published by players, so the map has to be nice in order to have a higher chance of getting the map accepted.

The game has been particularly controversial for its exploits by other members; most notably in June 2014, when an exploiter managed to put inappropriate images of a woman in the middle of every active server. Also, at the same time, a majority of the servers were flooded with water and the entire lobby structure was destroyed. The exploiter was never identified by name via normal members, but it was later reported that they were found and terminated by other administrators.

The game's title and thumbnail in November 2011, before release. 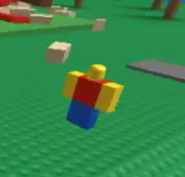 The old red-torsoed NPC is a notable perfect place to stand on during an earthquake since it is indestructible and players cannot be affected. It is removed in early 2018.

The old designs of badges before the redesign. 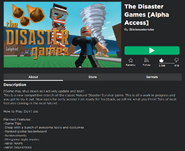 A NDS new branch was created back in 2014 which did not do well.

The stat button before the removal.

The stat page before the removal. 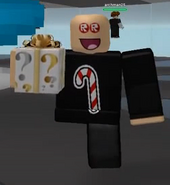 During the end of 2016, if players survived a triple (or more) disaster round, they will be gifted with Golden Mysterious Gift. It transformed into Golden Compass eventually.

Natural Disaster Survival- Trailer!
The trailer used in 2012 - 2014. This is not the original video.

Natural Disaster Survival Trailer - Roblox
The trailer used in 2017. This is not the original video. 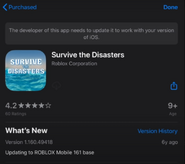 The voting GUI when equipping the Yellow Compass.
Community content is available under CC-BY-SA unless otherwise noted.