Users are encouraged to appeal a [ Content Deleted ]/terminated account if they believe that the punishment was false. If the appeal is successful, users are prompted to change their account's name, where they will be able to access their accounts, as if the ban never happened.

Many users claim that various assets get deleted without any true violation of the terms of service. False reporting can cause appropriate content to be flagged as inappropriate. Other users cite that references to Roblox competitors (such as Minecraft) causes assets to be indicated as inappropriate. The official terms of service does not address references to other games as unsuitable material but prohibits publishing copyrighted material to Roblox. A majority of these claims go uncited, and if a moderation error occurs, users are encouraged to appeal it. 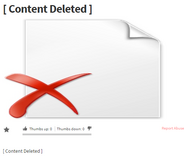 An example of a deleted asset, which uses the Windows Vista/Windows 7 icon. (No longer used since April 2015)

A deleted model.
Add a photo to this gallery
Retrieved from "https://roblox.fandom.com/wiki/Content_deletion?oldid=860773"
Community content is available under CC-BY-SA unless otherwise noted.