October 3rd, 2012 - October (?), 2012
Crash & Bernstein Banner Contest was an event that started on October 3, 2012 and ended on an unknown date. It was sponsored by Disney XD's show, "Crash & Bernstein". In order to get a special prize you had to create an advertisement banner that used the new Crash gear that was used to promote the series, then you had to send it to the "crash@roblox.com" mail account by using a mailing site such as Gmail or Yahoo Mail. Once submitted everyone who participated earned the XD Headphones at the end of the contest. Every day while the contest was still running, Roblox would choose one lucky winner to display their very own advertisement banner and then displayed it somewhere on the site. 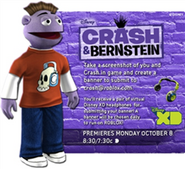 An image used to promote the contest that displayed all the information about it.
Add a photo to this gallery
Retrieved from "https://roblox.fandom.com/wiki/Crash_%26_Bernstein_Banner_Contest?oldid=817417"
Community content is available under CC-BY-SA unless otherwise noted.