DynaBlocks is one of three names that were considered for Roblox during its early development. [1]. The domain dynablocks.com was registered by Jim Stevens on December 12, 2003.[2]The name was later scrapped in favor of Roblox in early 2004[3]. Until late 2020, dynablocks.com, dynablox.com, and dynablock.com were all used as redirects to roblox.com.

The earliest recorded accessible version of the site is archived at the Wayback Machine, albeit with missing CSS and asset files.

At ROBLOX BLOXcon 2013, during the "State of ROBLOXia" presentation by CEO David Baszucki, an early mockup of the DynaBlocks website was shown. [4]. It includes a reference to GoBlocks as well, further confirming that GoBlocks, DynaBlocks, and Roblox were the three names that were considered. 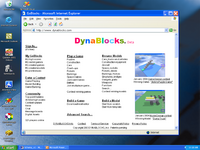 A mockup of John's Puzzle Game, winner of the January 2004 Game Design contest, the goal was to build a bridge that cannot break.

A mockup of Dump Truck, winner of the January 2004 Model Design contest.