Events were when the Roblox admins created a limited time challenge, that could involve different missions and have different limited time rewards that could not be obtained after the event ends. Unless the item became limited/free, which rarely happened. Roblox events also had a chance to be sponsored events where new movies (or other sponsored brands) usually kid friendly had limited time events commonly with their subject, They ran from the Homestead Furniture Making Contest (2007) to Egg Hunt 2019: Scrambled in Time(2019) before being replaced with Developer Events on May 14th, 2019.

On April 2, 2019, Roblox has announced that they're replacing monthly and seasonal events with developer-made content to boost developer games' concurrent visitors. Though this has been criticized a lot due to the fact that Roblox Events were a long tradition since the start of Roblox. Along with this, Roblox has announced that they're no longer giving out prizes for these developer-made games, which are items given out to the community for completing quests or specific tasks. This change was started on May 13th, 2019.[1] 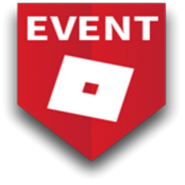 Below are all the events known, from 2007 to 2019. Such as Egg Hunt or Nickelodeon Kids' Choice Awards.

Retrieved from "https://roblox.fandom.com/wiki/Events_(gameplay)?oldid=770074"
Community content is available under CC-BY-SA unless otherwise noted.