View source
watch 02:05
Wiki Targeted (Games)
Do you like this video?
Play Sound
Discontinued
This article is about a discontinued feature.

This article is about Roblox Forums. For Roblox Wiki Forums, go to Forum:Index.

The Roblox Forums were a social portion of the Roblox website used for posting and socializing with other people in a text-based format. The main forums housed different sub-forums that had different purposes. Users were encouraged to read all pinned threads (threads that were located and stayed at the very top of each subforum), before making their first post. All content in the Roblox forums were subjected to Roblox's Terms of Use. A team of moderators ensured that forum content remained appropriate for Roblox's audience, though certain moderators were criticized by many forumers.

In January 2013, the forum section was revamped. This resulted in the moving and merging of many less popular forums. In October 2013 the forums' layout was changed into an iOS 7-based theme.

On May 1, 2017, a Twitch streamer known as Quackity launched a raid on the forums. His account, QuaciktyIsHot, was banned for 3 days as a result. Quackity created an alt account and continued the raid. The mods then discovered he was streaming and he was banned for stream-forum raiding. After that, QuackityIsHot was deleted and Quackity was IP Banned. The forums were then temporarily taken down afterwards.

On June 4, 2017, at 5:58 PM PDT, all the ROBLOX sub-forums were shut down temporarily due to major forum raids. These raids were lead by QuackityHQ, who had around 174,000 YouTube subscribers at the time. Many players were surprised at how the moderators took action for this forum raid, as they did not implement closing down the forums during similar DominusTrex and later, ClockworkHex bot raids. Some people believe the temporary shutdown was issued by a new moderator, OldBaronMondo, who was not around during the previous raids. During other forums raids, Roblox changed the minimum account age for someone to post. In some instances, it was as short as a 2-year account age minimum, while during other raids it was set so that nobody could post.

On July 14, 2017, Roblox announced that the many of the sub forums would be merging. The new sub forums would include: Roblox News & Discussion, Clans & Guilds, Let's Make a Deal, Game Design and Scripts. Two major forums not included in this update were Roblox Talk and Off Topic, two popular off-topic sub forums; this caused outcry from some members of the Roblox community.

On October 1, 2017, at 5:11 PM CST, a throwaway account named "jaredpogi123kaba" posted a link on the forums that would redirect to The Wayback Machine, which would then redirect to illegal child sexual abuse material. The post rose to the top of the forums and the link stayed for approximately 30 minutes. The account was banned and the post was eventually removed. Going to the link now shows the error message "Sorry. This URL has been excluded from the Wayback Machine.".

Soon after the forums went read-only, Roblox made the final decision to remove them after 13.5 years of existence and subsequently the Post Count statistic from user profiles. Trying to go onto the forum page today redirects to this notice.

The following are descriptions of each of the Roblox subforums and the associated categories they were nestled under:

During the Exisitince of the forums, a number of forums were removed. If you atempted to post on a thread on a deleted forum, the reply wouldn''t be posted. There used to a be secret forum, using the ID number 34, but anyone who posted on it got banned by MrDoomBringer. Some sub-forums were removed through various forum updates.

Some sub-forums that were removed were the following:

On May 1, 2017, QuackityHQ (a well-known YouTube user) was doing a stream on Twitch. He raided the ROBLOX sub-forums by instructing his viewers to spam on it. After viewing the stream, the ROBLOX admins decided to take action. Shortly after, ROBLOX shut down the site in an attempt to end the raids. ROBLOX then implemented a new rule that users who joined for less than 700 days (approximately 2 years) would not be allowed to reply to any threads, which quickly received backlash and criticism from the community. However, they still had access to all of the forums and could read the threads made by any ROBLOX users. In the end, the update was only temporary and it was removed within a day. After the incident, all accounts were required to fill out a CAPTCHA (a backronym for "Completely Automated Public Turing test to tell Computers and Humans Apart") before posting, in an attempt to prevent spambots from spamming the forums.

On June 4, 2017, however, Quackity raided the forums once again, barring all users from posting by imposing a 120,000-hour limit (or 13⅔ years). At the time, Quackity had around 174,000 subscribers. On the same day, at 5:58 PM PST, all ROBLOX subforums were temporarily shut down due to major forum raids. It was quite a surprise that the moderators took action against this, since they did not do anything as serious when the forums were experiencing DominusTrex and ClockworkHex bot raids. Some users believe the shutdown was issued by a new moderator who wasn't around during the raids, OldBaronMondo. This limit was removed the next day after once again receiving heavy backlash from the community.

If a new rule was introduced, a moderator would pin a new thread to let you know about it. What this meant is that their post was stuck to the top of the forum and didn't go down like regular posts. Pinned posts usually stayed there for a few weeks, so it would probably be a good idea to read it. 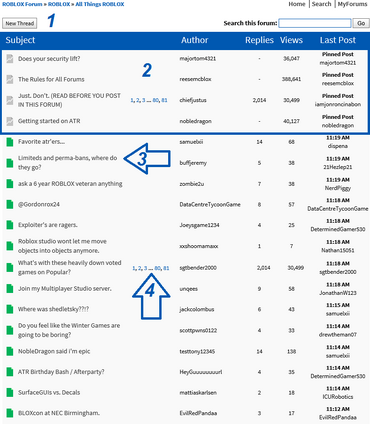 First time on an internet forum? They're easy to get around.

From the Main Page click on a forum that interests you. Whichever one you choose looks like the one right here.

Reading threads is simple. One person creates the thread, and then people post replies to it. You can reply too! Just hit Post Reply at the bottom of a post, and you can contribute to the discussion.

You may have noticed the little bar of buttons in the top right. Here they are, in case you missed them.

Home
This will bring you right back to the main page from wherever you are.

Search
This is useful for find posts you want to talk about before making a new thread. However, some features that are part of the search page are currently broken. This search is discrete and cannot be accessed through the search box on the top bar.

MyForums
This lists the last 25 threads that you posted in and the threads you are watching. The newer threads are at the top. This will also show any threads you are currently tracking in a separate box at the top of the page.

2013henry (now Volleybot) had the highest post count out of any user with over 131,000 posts. A list of every user with 50K+ post count could be found here. As of now, Volleybot has quit ROBLOX but often checks the site.

Players who make T-shirts that are about popular forum topics, such as RT and LMaD, were the most popular. An example of one is here.

Many people in the forum were known as "trolls", people who often deliberately made fun of people or aggravated them on the fourms for no specific reasons. An example of a troll post would be: "You are a noob, you suck.".

One of the most infamous of these was a terminated 2009 user who was known most often as ‘heartstrings’. This user had made over 100 alternate accounts utilising a VPN over 8 years to continue flamebaiting the forums after the ROBLOX Staff had to poison-ban her from the website because she was so dedicated to upsetting users on the forums. Heartstrings always took small breaks and returned to the forums on alternate accounts to continue her tradition of flamebaiting, only coming to an end when the forums were removed.

A large number of forumers tended to be slightly gullible, falling for bait. Bait is when you created a sarcastic forum, wanting to make players talk about it. For instance, on July 29, 2016, a link to an article claiming that magnetic pole shifts on that day would end the world was posted, and some forums dissolved into havoc. ATR got a few posts about it, and one person on S&I suggested that all accounts should be deleted prior to the end. However, OT had a mix of countdowns, end of the world parties, and religious wars. Although the forums did have a 13+ requirement, many younger users obviously lie about their age to get past these restrictions and is partly responsible for this.

Many users in the forums would tend to start a forum raid usually when the ROBLOX Admins were asleep. A forum raid is the activity of gaining a bunch of users from a sub forum and command them to spam hate or unneeded threads in another sub forum.

Some forum users used signatures, which are also used to express the player. There is also ROBLOX+, a Google Chrome extension (working on Opera as well) that automatically placed a signature in your posts. The ROBLOX staff allowed this, but had certain restrictions on them such as making them consist of one line only.

On December 4, 2017 an admin named RobloxStaff made a post on Roblox News & Discussion announcing the closure of the public forums, due to the moderators being unable to moderate them easily[1]. In the post however it does state:

"This coming year, we'll be investigating options to re-build forums that better serve you, our community, and our goals in providing a safe and constructive environment".[2]

On December 11, the forums officially were indefinitely closed down and the button on the sidebar to access them was removed. Trying to access the forums using the link brings up an error message telling forum users to consider other methods to the forums. It is currently unknown if the forums will ever reopen.

ROBLOX was hit with heavy criticism from all parts of the forum community. Such things existed as people with 100k+ forum posts being outraged that all their precious time and memories have been taken from them, and some were confused on why certain subforums that actually had an effect on the community as a whole (such as Let's Make A Deal and Game Design) were shut down without any immediate alternatives being provided. The vast majority also laughed at ROBLOX for having the gall to suggest Groups as a viable alternative.

It is commonly believed that the shutdown was the direct result of a YouTuber known as "iSoToxic" raiding the forums just a day earlier, along with the infamous post by "jaredpogi123kaba" on October 1 of that year, which linked to an illegal child sexual abuse site. There are however many unofficial forums out there, another one being robloxforum.com, and on this wiki .

Community content is available under CC-BY-SA unless otherwise noted.