watch 02:39
The Loop (Games)
Do you like this video?
Warning
There are a lot of free models that contain backdoors or other malicious scripts/assets. Be careful and check what scripts are in your model! Free models are often botted to the front page.

Free models are models created by the community for other users to get and use in games. However, many veteran users dislike the use of free models because it discourages creativity or effort in one's games and many contain scripts that can destroy a player's game. However, they are encouraged by Roblox staff, as they are very useful for game creators who are not so great at building or scripting.

Models can be bought for free in the "models" section of the library. Accessories bought by the player are also treated as models and can be used in Roblox Studio.

Originally, games were also able to spawn free models from the catalog. However, this feature was later removed, likely due to the potential for exploits.

Some free models are known to contain malicious scripts that clutter the workspace, lag the game, and/or even open backdoors for malicious players. For this reason, many users stay away from free models. A good way to make sure a model doesn't have an infection script is to check all the parts of the model in Roblox Studio (by clicking the small arrow next to the model in the Explorer tab), if it is a model that doesn't need any scripts in it, a user can run a command in the command line to remove all scripts, or if it is a model that does require scripts, users can use an antivirus plugin (although they must make sure to only use ones that are safe and verified). Most are found in the form of a weld and the name is often something obvious to its intention, such as "u got pwnd". These kinds of scripts date back to 2008.  Other names include: "ERoblocker", "dåååååååång..............you got owned", "Script........... or is it", "Guest Talk Script", "Anti-Lag", "Infection", "4D Being", "Vaccine", "ROFL", "virus" "H75", "OwO PILLA VIRUS OwO", "RED ROBIN YUMMMMMMMM", "MMMMMM PIZZZA UM NUM UM NUM", "I will show your password [redacted]", "ProperGråmmerNeededInPhilosiphalLocations;insertNoobHere" and "IAmHereToHelpYourPlace" just to name a few. Copied models always tend to have a virus in the model. 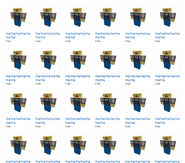 An example of library spam with the search query being full of the same model.

Endorsed models are models that are officially selected by Roblox staff. They follow specific criteria, such as being able to run without any bugs, errors, or lag, being easy to edit, being able to run independently without having to load other models or modules, and high-quality. The developers who publish these modules receive Robux as commemoration for their work, and their models are typically displayed before others in Roblox Studio's toolbox. Roblox typically endorses models that are made by well established developers, the most prominent ones including Quenty , UristMcSparks , and NWSpacek .

Endorsed Models do not include viruses meaning they are safe to use, however they are still disliked by the Roblox community. When a developer gets official endorsement on one of their models by Roblox, they receive the 'Official Model Maker' badge.

Despite multiple occasions of Roblox encouraging the use of free models, they are often frowned upon by the community. Much of the community believes the use of free models indicates a lack of effort on the creator's part because they used another person's work (and often without giving credit to said person) instead of creating it themselves. Some believe that this shows a lack of creativity and commitment to create a game with fully original assets, which in turn means that they are a bad developer, hence, breaking any trust the end-user may have with their game. Some developers of kits will also sneak a hint box into giver kits that forces a hint that declares thanks to the creator of the kit when deleting the hint creation code, the kit will no longer work, even more confusing is that the code that makes the kit reliant on the hint is well camouflaged. Some models may also create a small text GUI on top of the screen that says the creator of the game thanks the original creator of the model, sometimes even without the creator of the game knowing it.

Retrieved from "https://roblox.fandom.com/wiki/Free_model?oldid=1057711"
Community content is available under CC-BY-SA unless otherwise noted.