View source
watch 02:56
Raise a Floppa - The Loop
Do you like this video?
Play Sound
See also: Timeline of Roblox history 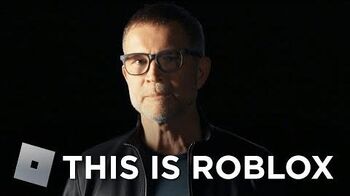 In 1989, David Baszucki founded Knowledge Revolution, a company which concentrated on educational physics and mechanical simulation software. There, he wrote a general-purpose physics simulator called Interactive Physics.[1] He was the president of Knowledge Revolution until December 1998 and during this time was first joined by Erik Cassel, then in 1997 by Keith Lucas.

Knowledge Revolution was acquired for $20 million in January 1999 by MSC Software Corporation, for which David Baszucki served as vice president until he left with Erik Cassel to found Roblox Corporation in 2004.[2] They were soon joined by other employees of MSC Software.

Roblox began development in 2003 by David Baszucki and Erik Cassel. Before the name of Roblox was finalized in January 2004, two other names – GoBlocks and DynaBlocks – were considered. During this time, it was also named Roblox v.10 according to DomainTools screenshots. Roblox came out of beta and was officially launched on September 1, 2006.

The original currency, ROBLOX Points, could have been earned by logging in daily or by playing minigames. Features added in 2006 and 2007 included private messages, the search bar, and avatar customization. Roblox badges were added on December 22, 2006.[3] In March 2007, Roblox became compliant with COPPA, with the addition of safe chat, a chat mode which limited users under the age of thirteen to communicating by selecting predefined messages from a menu.[4]

The first Roblox convention, the ROBLOX Rally 2011 was held in San Francisco on August 1, 2011. A similar event called the ROBLOX Game Conference 2012 was held in 2012. The subsequent ROBLOX BLOXcon 2013 was held in Chicago, London, and New York, then completed by the Virtual BLOXcon 2013 which could be watched through a live stream.

On April 1, 2012, the site was compromised which enabled an unknown individual to vandalize the website. Banners were added to the site which displayed offensive content such as: "thank you minish for messing up the economy. nub." and "Haha these are so funny let's go spam the forums about them :D". Countless other banners with offensive content were also added. Some users were given large quantities of Robux, and several users were compromised, the most notable being 1dev2. Roblox then responded by taking the site down for maintenance in order to resolve the issues with the site. The site returned on April 2 and on sometime around April 4, all users who were involved in the hacking were terminated and IP banned in precaution of any further attacks.

A trading system allowing users to trade limited and limited unique items was enabled for all premium members on July 12, 2012.[8]

On February 11, 2013, co-founder Erik Cassel passed away after a difficult battle with cancer.[10]

The Developer Exchange program was released on October 1, 2013.[11] This program allows developers with Outrageous Builders Club membership to earn money by exchanging Robux.

On March 15, 2016, David Baszucki announced that tickets would be discontinued after thirty days.[12] During the thirty days before they were removed, items that could only be bought with tickets were released. Tickets were removed on April 14, 2016, at the same time as the Trade Currency system which allowed trading of both currencies.

A text filtering feature using the Community Sift service replaced the safe chat menu in 2016. This allows users under the age of thirteen to create content on the website and to use messages in games that are not predefined.

Sometime in 2020, Roblox's name would change from ROBLOX to Roblox, without the stylized "O" and capitalization of all letters, instead having only the letter "R" capitalised, and the rest uncapitalised.

Roblox has held contests, tournaments, egg hunts, conventions and other events regularly since 2007 and the frequency of events has increased over the years.

Since 2011, Roblox has hosted conventions in multiple cities where could go to meet the Roblox staff, view demonstrations, and participate in activities.

The first convention was held at the Exploratorium in San Francisco, California on August 1, 2011. It was called the ROBLOX Rally 2011.[13] Players who attended the event received a free lunch, as well as a poster, a T-shirt, a water bottle, and a lanyard.

The purpose of the conference was for players to meet up with each other and to discuss Roblox, ask questions to the Roblox staff, and find out about future updates to the game. One of the most notorious updates that was discussed at the Roblox Rally 2011 was the new Roblox terrain.

The second convention was held at the Santa Clara Convention Center on July 14, 2012.[14] The convention was named the ROBLOX Game Conference 2012. Players who attended the event received a poster and a lanyard, plus extra items if they purchased tickets before certain dates.

At the conference, players could meet each other in real life, share ideas about Roblox to other users as well as Roblox staff, and find out about some of Roblox's plans for the future. There were several conferences at the convention about future updates to Roblox, as well as user feedback and suggestions. Multiple awards were given in specific categories.

ROBLOX BLOXcon 2013 was the first convention held outside of California. Three different conventions were hosted, at separate dates and in three cities. The first convention was held on July 13, 2013, at the Museum of Science and Industry in Chicago, Illinois.[15][16][17] The second, BLOXcon London, was held at the Royal Air Force Museum in London, England.[18][19] The third, BLOXcon New York, was held at the Intrepid Sea, Air & Space Museum in New York City, on August 10, 2013.[20][21] A final convention, the Virtual BLOXcon 2013, was announced in June and held online on September 21, 2013, for all players who could not attend one of the previous conventions.[22]

Since 2015, Roblox has hosted every year a conference where game developers and Roblox staff were gathered for a showcase and to share ideas.

In 2015, three conferences took place in San Francisco, Atlanta, and Europe. The first conference, RDC West, was hosted in San Francisco from March 6 to March 8. The second conference was RDC East, while the third was RDC Europe. Only users who had been invited could attend the events.[23]

In 2016, the RDC 2016 conference took place in San Jose. It had more than 200 attendees. There were conferences about mobile upgrades, the R15 avatar, and client upgrades.

In 2017, there were two locations and dates for the Roblox Developers Conference 2017. The first conference happened in San Jose, between July 21 and July 23. It allowed creators to learn about the fundamentals of game development, including design and monetization. The second conference happened at the YouTube Space London in the United Kingdom from August 4 to August 5. There were informative sessions, a gaming tournament, and a Game Jam session where participants had to team up with other creators to build a game in a limited amount of time.