ImPlicitNgine is the name of the physics engine that ran on Roblox during its early stages.

ImPlicitNgine was created by David Baszucki in the programming language C++ in 2004 and allows the accurate simulation of hundreds of rigid bodies, such as cubes, in real time. It also allows a place to run without any type of geometry. However, the ImPlicitNgine is quite simplistic and can only calculate collisions for rectangular and spherical objects. This means that Shedletsky's attempts at creating custom collisions on meshes would not work unless the engine was modified. This engine was replaced later on. 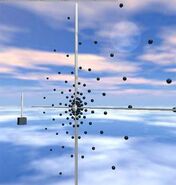 (click to view) GIF showing the physics of 49 bricks in an empty place.
Community content is available under CC-BY-SA unless otherwise noted.
Advertisement