Prepare the LEGO Hero Factory Team for emergency action! The evil brains have latched onto a bull-like creature and transformed it into a ferocious minotaur called Pyrox. Stay away from its huge horns and rotating flame staff! Only a Hero’s sword and shield can protect Makuhero City from the fiery Pyrox now. Send that brain-infected minotaur back into the volcano it came from!

The game had two teams: the Furno team and the Pyrox team. The goal was to capture more points from the control points before the other team. Then if the player won or failed the game would simply restart again.

As of 2020, the game thumbnails and its creator have been deleted/terminated. 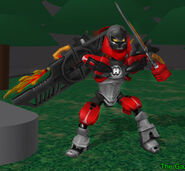 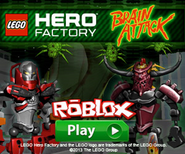 The first ad for the LEGO Hero Factory: Brain Attack event.
Add a photo to this gallery
Retrieved from "https://roblox.fandom.com/wiki/LEGO_Hero_Factory:_Brain_Attack?oldid=972527"
Community content is available under CC-BY-SA unless otherwise noted.