ROBLOX has partnered with Disney XD to promote their new show, Lab Rats. ROBLOX developer Luke Weber and level designer Tara Byars have teamed up to create challenging timed missions in three classic ROBLOX levels. In order to complete the missions successfully, you will need to use the Lab Rats bionic super powers. If you are successful in completing all three missions, you will earn the Lab Rats Cap. Be sure to tune in for the premiere of the all new original series Lab Rats on Monday, February 27 at 8:30/7:30c on Disney XD. You can check out new episodes every Monday night at 8:30/7:30c.

Lab Rats was an event that took place February 7, 2012 to (?) (?), 2012. Not much is known about this event, other than the sponsorship was to promote the Disney XD live-action show with the same name. There were 3 levels all together in the event and 3 items to find in each level to move on to the next level in the game. In the final level (Davenport's Inventions) if you found all three items you would be given a prize. 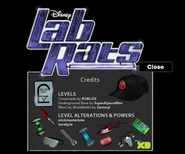