Why Don't We Launch Party

Metaverse Champions is a chance to show all of Roblox you've got what it takes.

⚡️ Earn limited-time items each week, plus a final item for whichever champion gets the most support

Players could win Rthro bundle items, mystery boxes, and an egg. Mystery boxes would open into different items starting on May 17, 2021, until the event concluded, along with a grand prize which was obtainable in the Hub, themed around the winning champion: Sparks Kilowatt.

This was the first "Spring Hunt" to only feature one egg, being the Tiny Egg of Nonexistence.

These hatched out of the launcher boxes on May 21, 2021. When combined, they form a valkyrie helm, but since the hat limit is 3, you can't get the full valk without owning the Launcher Pro badge, or by advanced mode in the Avatar Editor.

The only way the Metaverse Valkyrie Shards was obtainable was to get the 4 boxes from Mvps, Roblox Admin, Developers, Video Star's crate in order to combine them together.

Sparks Kilowatt's portal menu in the event hub during Week 1

AJ Striker's portal menu in the event hub during Week 1

Fey Yoshida's portal menu in the event hub during Week 1

Wren Brightblade's portal menu in the event hub during Week 1 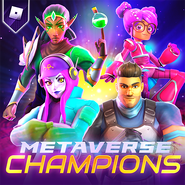 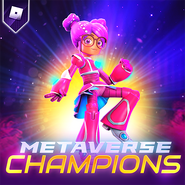 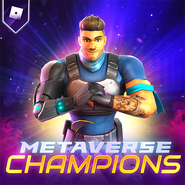 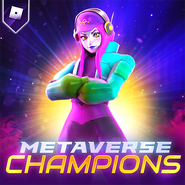 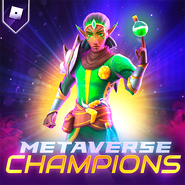 The first thumbnail for the Metaverse Champions Hub game

The second thumbnail for the Metaverse Champions Hub game

The third thumbnail for the Metaverse Champions Hub game. The complete Metaverse Valkyrie with all four shards.

The description of the event hub at May 21, 2021 and Sparks Kilowatt reigning supreme.

The message developers of games representing AJ Striker got alongside the AJ Striker Pin.

The message developers of games representing Fey Yoshida got alongside the Fey Yoshida Pin.