Roblox Wiki
Register
Don't have an account?
Sign In
Advertisement
in: Events, Articles with trivia sections, Concerts,
and 3 more
English

One World: Together At Home

One World: Together At Home

In aid of Global Citizen and the World Health Organisation’s (WHO)’s COVID-19 solidarity response fund, we’re bringing the entire Roblox community together to spread hope and positivity in a time where they’re needed the most.

Join your fellow Robloxians in-game this weekend for the special digital event “One World: Together At Home.”

Featuring exclusive musical performances from some of your favorite artists, this historic, global event is a chance for all of us to come together and enjoy great entertainment while celebrating the frontline workers leading the fight against COVID-19.

One World: Together At Home was a virtual concert event on Roblox spreading awareness of social distancing during the COVID-19 pandemic. The event game opened on April 17, 2020, its event page was made public[1], and a blog post was published explaining how the event would specifically function.[2] The actual concert was held on the next day. During the event, live footage of the TV program event was streamed on Roblox in a similar fashion to the 7th Annual Bloxy Awards.[3]

The stream in general has been criticized for certain inappropriate sections being unfiltered, despite the inability to filter due to the event being live streamed into the game, and administrators receiving a file to make the game broadcast in the first place. In particular, the song, Mr. Brightside was performed by The Killers contained explicit portions that were not filtered prior to the broadcast.[4]

The theater in general is criticized for the inability to hear sound other than full-screen mode, or if the user is very close to the screen. The exact same theater was used for the 7th Annual Bloxy Awards, with the exception of minor tweaks and a brand new currency, which also upset some users. Some gear, such as the cat[5] and scooter, were glitched and unable to function properly.

The place also did not filter out

Sounds from hats, leading to users being annoyed by the constant sounds playing from hats such as the Brighteyes' Witches Brew Hat. This, however, did not affect users in full screen mode. Still, it led to problems for YouTubers and live streamers as they could not utilize full screen due to copyright restrictions. 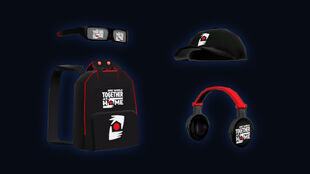 Promotional items for the event that were free. 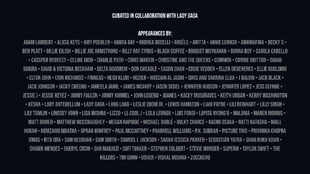 This is the cast of people who were seen at the event, mainly celebrities.

The white banner which was used to promote the event's premiere. This only showed to users with Dark mode on under Theme in settings.

The orange banner which was used on select pages to promote the event's premiere.

The white banner which was used to promote the event's premiere. This only showed to users with Dark mode on under Theme in settings.

The black banner which was used to promote the event's premiere. This only showed to users with Light mode on under Theme in settings.

The orange banner which was used on select pages to promote the event's premiere.

One World Together At Home Roblox
Roblox's trailer for the event.

One World TogetherAtHome Concert Recap
Roblox's recap for the event.