View source
watch 02:58
No Man's Sky Update - The Loop
Do you like this video?
Play Sound

R15 is an avatar body and animation rig in Roblox, which has more joints than R6 and is able to bend. The model is named after the number of body parts it has (15 parts) instead of 6 (R6). The model was available to the public early in the form of a testing place. As the description of the experience says, all the current animations are temporary, and thus will most likely be changed in the future.

Implementing R15 and scaling into an experience

R15 is available for the public on Roblox. Previously, to enable R15, users would go to the Create page, click the Experiences tab, and configure the game with the body type enabled. To set R15 in your experience, open your published experience in Roblox Studio. From there, click on Game Settings and navigate to the Avatar tab.

Currently, some accessories aren't offset correctly on the avatar. Not all gears work. Roblox is currently converting all of the accessories and gears to work with R15. However, with over 12,000 accessories currently in the avatar shop, it does not seem likely that every accessory will be optimized for use with R15.

On January 18, 2016, Roblox announced a feature called Avatar 2.0. It received mostly-negative reception. All the negative feedback caused Roblox to go back to the drawing board and make something else, later remaking Avatar 2.0 as R15.

The Scaling feature was released on November 17, 2016. It allows users to scale their avatar's width and height. Experience-developers can set whether scaling is user choice or normal.

Roblox introduced two new sliders to the R15 scaling interface on May 30, 2018, with the attributes of Body Type and Proportions. These were subject to speculation as some users believed this was an indication of Rthro being released soon.

Roblox eventually unlocked the sliders with the introduction of Rthro,Previlously it was 30%,but it was unlocked to 100% in October 22,2018.

Although some people liked the feature, many users did not respond well to R15 for a variety of reasons. A small portion of these users thought it would make Roblox harder to run on old systems, however; for most this was not much of a problem.

Many people felt that the stock animation was awkward, ugly, and did not suit Roblox well, hence the title, Roblox. Others feared that this was a step in the wrong direction for Roblox, and eventually it will only benefit developers. Many users took to the Forums to voice their complaints and rants. However, R15 was completely optional with the exception of experiences that are R15-only, although in the past few years most experiences have moved to R15-only mode. Plus there are different animation packs available in the catalog that can make this body type look more appealing for those who dislike the original animation.

Many people have complained that the gaps are too noticeable, or that they should be filled in. Or that it looks ugly with/without packages. The joints' disconnecting also seems to be a problem. Also, on May 16, 2018, Roblox updated the R15 default, but it stretched down the blends, so when you're moving around, the gap was very noticeable. 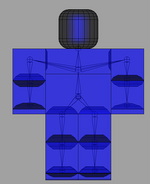 An animation with a package (A test that is)

All parts in R15 (Roblox Studio)
Português do Brasil
Community content is available under CC-BY-SA unless otherwise noted.
Advertisement