On April 13, 2016 the Trade Currency system is going to be shut down. More info can be found here.

The ROBLOX Trade Currency (or RoblEX) is a section of the site released on November 21st, 2008[1], used to trade both currencies, ROBUX (abbreviated R$) and Tickets (abbreviated Tix) with different rates. Most casual users use it for converting their currency to buy different goods; however, it is possible to earn money through the Trade Currency by manipulating the ratios and exchanging currency for the right rates.

Pair lists what is being exchanged through the Trade Currency. The Pair section always reads "BUX/TIX", which indicates that R$ and Ticket are being exchanged constantly.

The rate states what rate your Ticket and R$ will be transferred through if you chose to use a market trade. The rate is created by taking the highest rate for Ticket and dividing it by the lowest rate for R$.

The spread is the distance the highest Ticket rate is from the lowest R$ rate. The larger the spread is, the larger the difference between the two rates.  With a large spread, one can gain larger profits from their transaction, only by using limit order.

Negative spreads mean that the Ticket rate is higher than the R$ rate, meaning one can make profit using market order.

The high and low rate shows the lowest rate for R$, and the highest rate for Ticket out of all outstanding transactions within the last 24 hours.

In the very middle of the page lies the Trade window; this is where you perform transactions by entering how many R$ or Ticket you wish to enter and hitting "Submit Trade". One can choose between Market Order, which transfers your trade according to the current default rate, or Limit Order, which allows the user to choose the exact amount of Ticket or R$ they want in exchange for their trade.  Checking "Allow split trades" before submitting will allow the user's trade to go through in separate parts, unchecking it will try to put the trade through in one lump sum.  If the trade is not allowing split trades, trades behind it can be processed before it. 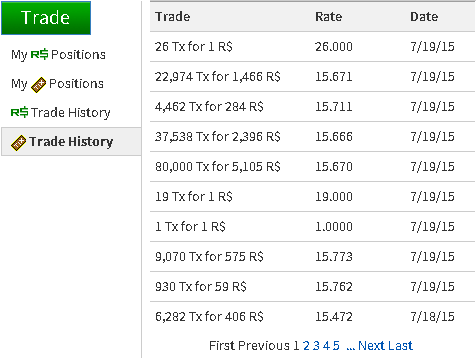 On the left of the page below the trade button are the user's current positions and history, set up in four tabs for convenient use. You can access any current R$ or Ticket trades here and cancel any transactions in progress. You can also access your history of previous trades here.

In this example, the amount being donated is R$100.

This same system can be used to give Ticket , but will cost more for the recipient.

Retrieved from "https://roblox.fandom.com/wiki/RoblEX?oldid=260442"
Community content is available under CC-BY-SA unless otherwise noted.