View source
watch 02:34
Fire Emblem Warriors: Three Hopes - The Loop
Do you like this video?
Play Sound
For other pages with similar titles, see Roblox (disambiguation).

Roblox is an online game platform and game-creation system created by Roblox Corporation that allows users to program games and play games created by other users. It is the primary product of Roblox Corporation. Founded by David Baszucki and Erik Cassel in 2004 and released in 2006, the platform hosts user-created games, designated as "experiences" since May 2021, of multiple genres coded in the programming language Lua. For most of Roblox's history, it was relatively small, both as a platform and a company, due to both co-founder Baszucki's lack of interest in press coverage and it being "lost among the crowd" in a large number of platforms released around the same time. Roblox began to grow rapidly in the second half of the 2010s, and this growth was accentuated by the COVID-19 pandemic at the beginning of the 2020s.

Roblox is free-to-use, with in-experience purchases available through Roblox's virtual currency "Robux". As of July 2021, Roblox has over 215 million monthly active users, with it being used by over half of all children aged under 16 in the United States. Roblox has received generally positive reviews from critics.

From December 2003 to January 2004, Roblox went through multiple different names, such as GoBlocks and DynaBlocks, with their domain changing respectively multiple times in the short time frame. "Roblox" became the final name choice, and was finalized on January 30, 2004.

From 2004 to February 2005, Roblox underwent alpha testing. Following that, Roblox went into beta testing until September 2006. Roblox was then fully released to everyone with multiuser experiences, and would gradually receive new updates and features over the years to shape it into what the platform is today.

Roblox is available on Windows, MacOS, iOS, Android, Xbox One, Xbox Series X|S, and Microsoft Store. People can create their own unique username; formerly they could also use Roblox as a Guest which did not require to register for Roblox, but the Guest feature was removed in October 2017.

Users can also create their own places. Users also have their own character, which can be customized via avatar shop purchases, and they can participate in social aspects of Roblox such as group walls, messages, and the party chat feature.

Places are where users visit experiences on Roblox. Users can create an unlimited amount of places, but active places are limited to 200 places regardless of membership.

Before September 27, 2017, the number of active places a user could have was based on one's Builders Club membership:

Roblox has now changed this so that any user can have up to 200 active places at a time. Roblox provides templates for users who do not know how to start.

Subscribing to Roblox Premium gets you a monthly Robux stipend and a 10% bonus when buying Robux. Not only that, but premium members can resell their in-game items and earn additional Robux from the sales, this is called a Premium Payout. They are also presented with the opportunity of trading their items with other premium members on the platform.

The Avatar Shop, formerly known as the Catalog, is a place where users can purchase accessories, animations, clothing and more to customize their avatar (hence the name).

Before Tickets was removed from Roblox, any user could accumulate tickets to buy items or even convert them into Robux. However, after its removal on April 14, 2016, there was no other form of daily benefits to users besides users that purchased Builders Club membership - before its removal - or Roblox Premium.

Clothing is the only feature on Roblox that is mainly community-driven, and clothing cannot be sold for free unless the person selling the clothes was none other than the owner himself, ROBLOX. However, clothing could have previously been sold for free, and all clothing that was priced free is still free.

Similar to the Avatar Shop, the Creator Marketplace is used by users and developers to publish models, scripts, audio, decals, meshes and plugins for other Roblox users to view or use.

All available items in it can be purchased for free with the exception of plugins, and any user may take such purchased items to place in their inventory for their own use.

Users can obtain an unlimited number of items from the Creator Marketplace. Furthermore, some groups placing their models in it to make it easier for assets for them to be used in multiple experience.

Sometime in late 2018, Roblox removed the ability for users to search for Creator Marketplace items that are off-sale, due to many assets by developers being stolen by others with no credit.

In December 2019, RoxyBloxyy announced plans for paid plugins.[6] The announcement also revealed plans for many other marketplace types to become paid access in the future. The paid plugins update was implemented later that same month.

Roblox runs a blog called DevHub, where they post about released updates and showcase creations by developers and staff.

The Roblox favicon in white. 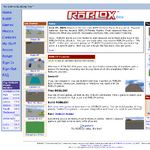