Town and city
Accurate as of Apr 01, 2020
Robloxian High School is a high-school roleplaying game created by the Robloxian High School Group (also known as Red Manta LLC). It is well known for its intricate avatar editor, which allows players to use accessories from Roblox's catalog to customize their avatar, as well as scale and re-position them to create unique characters.

In the second map, dorms were the system used for housing, located in a three story building. Players were able to customize these freely with walls and furniture. In September 2018, dorms were replaced with the new housing system. Later, in October of 2018, the original map was brought back, but dorms did not return; the gas station and bakery were added in its former place. The new houses were placed in the empty area near the skate park and sports field.

Similarly to the dorms system, players are able to customize their own house; however, houses were larger, included pre-placed walls, and contained furniture upon purchase. Houses were introduced in the September 2018 "Mega Update".

Players criticize the game for being similar to Cindering's Roblox High School and Alexnewtron's MeepCity and for promoting online dating. Supporters of the game note that many of the game's features differ from Cindering's version, such as its expansive avatar editor and more roleplay-focused environment.

In April 2018, Robloxian High School hosted an in-game event where the player would have to find 8 eggs to unlock a prize. Each egg was placed in a different location on the map, with the prize for collecting them all being the Chocolate Bunny pet. This pet was removed alongside the others in November 2019. An Egg Compass was introduced for 50 Robux that would alert the player of what direction the nearest egg was. This egg hunt lasted throughout the duration of Egg Hunt 2018: The Great Yolktales.

During the Hallow's Eve 2018 event, Robloxian High School participated with a maze in the place of the sports field. Coins were scattered throughout alongside Halloween monsters that would reset the player upon touch. Completing the maze would award the player the Possessed Cat Head.

Additionally, a side quest was available that involved collecting five creatures from Fantastic Beasts and Where to Find Them. Collecting all five would award the player with the Pickett Shoulder Companion. Players could purchase the Beast Comapss for 50 Robux that would alert the player of what direction the nearest beast was.

During Egg Hunt 2019: Scrambled in Time, players would compete in the recently added minigames near the sports field. The minigames were Disco Spleef, Sword Fight, Dodgeball, and Thermal Reaction. Obtaining an A grade in each of the four minigames would award the player with the Bookbegg. 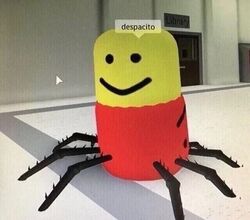 The despacito spider, infamous for trolling and spawning many more variants of itself. 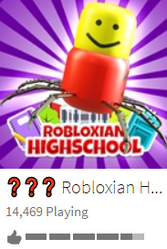 The game's icon during the introduction of the "spider cave", showing the iconic avatar. 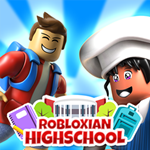 The decal of the game when cooking classes were introduced

Main thumbnail for the 4th map, which was home to the minigames.

The main thumbnail for the Minigames Update, listing the primary features added. 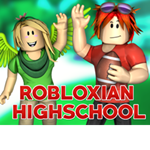 Robloxian Highschool's old school shown in a dated thumbnail.
Add a photo to this gallery