A shirt is a type of clothing on Roblox that covers the torso and arm body parts of a character with a texture defined by the shirt's ShirtTemplate property. Shirts and pants were released on April 24, 2008.

On April 23, 2008, Shedletsky uploaded the official announcement for shirts & pants to his YouTube channel, titled: Shirts... And Pants. Pants Pants Pants Pants, with its music composed by Stealth Pilot.[1]

Users can create shirts by creating an image based on a template and then publish them using the shirt ContentBuilder. After being reviewed by a moderator and approved, the user then can sell or use the shirt. It used to be that only Roblox Premium members can make and sell shirts, however, roblox removed the need to have premium to upload/sell clothing but with a 10 robux fee (previously 50). everyone can make and buy shirts.

A slightly popular program to use for shirts/pants is Paint.NET, a paint program, because of its ability to make shirts transparent. A few users have published videos that demonstrate shirt shading using Paint.NET or GIMP. and MS Paint.

The price floor for shirts was originally 10 Robux, but was decreased to 5 Robux due to the removal of the Tickets currency in March 2016.

On an unknown date, users had permission to publish shirts for free. This was also later changed just to be Roblox on another unknown date.[citation needed]

Roblox has shirts sold for free. Click here to see all the free shirts.

Templates are tools that create the basic layout of clothing and help guide creators in designing their clothing. Roblox has created templates to help content creators create clothing to work with almost all character types. 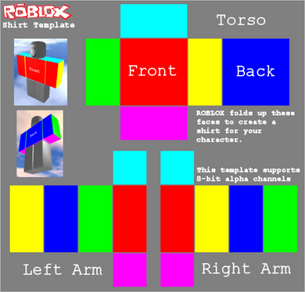 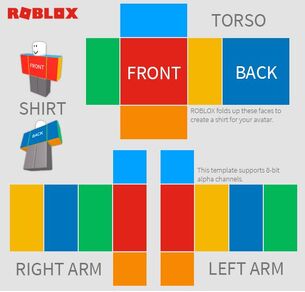 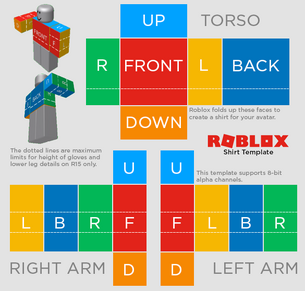 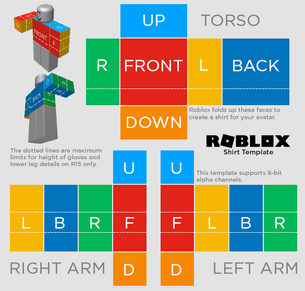