The Teenage Mutant Ninja Turtles and Master Splinter are fighting to save New York City from Shredder and his ninja foot soldiers. Move through the sewers as Michelangelo, Leonardo, Donatello or Raphael, using each of their unique skills to battle Shredder's foot clan. If you are the MVP, you will get the chance to battle Shredder as Master Splinter! And don't forget to tune in to Nickelodeon to watch the Teenage Mutant Ninja Turtles battle evil, every Saturday morning at 11 a.m.!

Teenage Mutant Ninja Turtles: Turtle Trouble (a.k.a. TMNT) was a sponsored event that started on October 1, 2012, and ended sometime in November. It was made to sponsor the Nickelodeon show with the same name and was created by the user "TMNT".

The event had 4 unlockable characters to play as (Leonardo, Donatello, Michelangelo, and Raphael). There was also a 5th unlockable character which you had to be the highest MVP in the server and beat all the missions, once when you did this you would unlock Master Splinter.

When joining the game there would be a start screen and after when you press the play button, you could choose a character to play as. Once when a player chooses a character, you would spawn in the lair which was in the sewers. The game had various places where enemies called the "Foot Clan" would spawn. You would be assigned to defeat them at these certain locations that were shown on the radar on the bottom right side. After you've defeated all the Foot Clan soldiers in the sewers, then you would to go to the city and defeat more there. Once when you defeat all the enemies in the city, then your last mission would be to defeat Shredder which was a boss battle. Then if you won or failed the game, it would simply restart again. 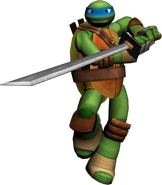 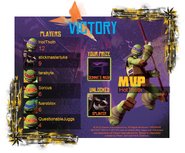