Before reading, keep in mind that all of these websites have been changed/taken down or IP blocked so only staff can access them. Enjoy!

Testing sites are websites used by Roblox Corporation to test potential Roblox updates. All of these sites as of now are either down or off-limits to visitors.

Typically, when Roblox opened a testing site to players, a system-wide announcement was placed on the main Roblox website with a link to the testing site. Unlike the regular site, players' inventories could be reset at any time. Robux and the now-replaced Builders Club could not be used or purchased on the websites and could not be transferred to the main Roblox website.

The Roblox test site located at dev.roblox.com has existed as earliest as November 14, 2006. The original Roblox test sites became defunct in late 2010 but were still accessible until early 2017. Between 2016 and 2017, the sites typically used for public testing were either abandoned or restricted for viewing to Roblox staff and whitelisted members.

These sites may open at any time as all of these domains are still owned by Roblox. Most of these sites are still active, but are closed from the public.

Many users create fake Roblox websites claiming to be a test site and/or to give free Robux or Builders Club. Do not visit any testing site that does not have robloxlabs.com or roblox.com domains, as they are simply trying to steal accounts by tricking you into giving them your password, authentication codes, or your .ROBLOSECURITY Cookie. If the site asks you to download something it is most likely a malicious file.

On March 9, 2021, one of the testing sites, sitetest3.robloxlabs.com, was open accidentally due to Roblox changing the server software from IIS to nginx. This allowed random users to be able to access the API sites, along with the main site. During this time, an uncertain number of users signed up to the site; some uploaded games and some even played those games prior to closing of the site.

The site was seen to have the new Roblox style, along with items that were not known before.

Before it was shutdown, Clonetrooper1019 discovered that this site was still accessible (although shortly after it was closed).[1]

Below are some images took when the incident happened. Some of them showcase gameplay of sitetest3. User information has been censored in these images with a blur. 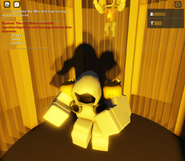 Two users in a sitetest3 game.

Another clear shot of the game they are in.

The view of the other user on the weird lighting game.

Another image from the perspective of the second player in the game.

The famous Minecraft game which was banned on Roblox, was uploaded to sitetest3.

The avatar editor of the Roblox sitetest3 client.