Roblox Wiki
Register
Don't have an account?
Sign In
Advertisement
in: Inactive groups, Pages that need to be improved, Groups

View source
watch 02:05
Wiki Targeted (Games)
Do you like this video?
Play Sound
This page needs improvements to meet the Roblox Wiki's standards.
Please proofread or rewrite this page as necessary to ensure that it meets the Roblox Wiki's content and style standards. The specific problems are: RW:MOS

None
The Robloxian Military [RM] was once a prosperous and innovative modern military group. Dellkiller123 created it in May 2013. The group rapidly grew due to the Robloxian Military Recruitment Center's fantastic success, hitting a peak of ~750 concurrent players. In July 2013, the Robloxian Military hit its first significant milestone of 10,000 members. Once Dellkiller relinquished the group to TehProblemSolver (aka. Zleck98), the group coasted for a few years changing ownership semi-frequently and a lowered activity rate. In late 2015, ExcellentJ gained ownership of the group, and the group returned to a state of activity and relevancy. The Robloxian Military reached its peak member count going, to 65,000 members. On June 3rd, 2017, ExcellentJ announced his retirement and proceeded to give ownership to Bizbot19. Bizbot19 was an innovative and extremely talented developer who built the modern and intricate Facility 64 and Tanis Base. Bizbot19 continues working on the Arctic Patrol Base; the development was going relatively smoothly until a few scripting hurdles ground development to a halt. With mounting pressure and frustration in the community Bizbot19, suddenly transferred ownership to SCP504 on October 28th, 2017. SCP504 immediately shut down the group to focus on developing the Patrol Base, ultimately ending all activity and destroying the community that once existed.

Dellkiller123 created the Robloxian Military on April 28th, 2013, marking the start of the Golden Age of RM.

A group raided RM's patrol base leading to a massive RM response alongside its allies, leading to the base to reach the front page of Roblox, with a peak of ~750 concurrent players.

The massive uptick in player count remained for a few weeks, though numbers slowly started dwindling. The base remained on the most popular games list because of its extensive success, and many groups continually raided. This popularity allowed RM to gain thousands of members, further growing the group.

As the popularity dwindled, so did Dellkiller123's activity. In April 2014, Dellkiller123 transferred ownership of the TehPorblemSolver (Zleck98) because of his loyalty.

After some upheaval within the group, individual High Ranking members created another Robloxian Military that did not survive long. http://www.roblox.com/My/Groups.aspx?gid=1121825

DrNosy (LordNosyFatt1) claims leadership; the group remained. Certain High Ranks and High Command in the new administration longed for the Golden age and hoped to return RM to its former glory.

DrNosy announces a developmental shut down of the Robloxian Military on April 22nd, 2015. DrNosy began the development of the new Roblixan Military Academy.

Dellkiller123 creates the spiritual successor to the Robloxian Military, the Roblixan Coalition [RC], on May 5th, 2015.  https://www.roblox.com/groups/2551035/Robloxian-Coalition-RC#!/about

The Robloxian Military had not seen the player count and community engagement the DrNosy longed for.

With the new administration, RM started growing and starting back up again. There was a massive bump in new members because RM was one of the first-page group in the military section; this reinvigorated the community and led to consistent activity.

On February 12th, 2016, wildNinjar, a former Vice Commander, took control of ExcellentJ's account. He gave himself all of RM's funds and transferred ownership to himself. Heroically, diehard1234 convinced wildNinjar to give RM back to ExcellentJ. wildNinjar, furious, gave privates the ability to access the group admin to cause chaos in the group.

On February 8th, 2017, The Robloxian Military got third place in the Favorite Battle Group section in the 2016 Bloxy awards. Around this time, Vice Commanders, Bizbot19 and Zleck98 announced a new Arctic Patrol Base.

On June 3rd, 2017, ExcellentJ transferred ownership to Bizbot19, who proceeded to shutdown RM to focus on the Patrol Base development.

Development of the Patrol Base was going smoothly until Zleck98, the main scripter, left the group, leading to a stop in development.

The Death of RM

As frustration and mounting pressure from within the High Ranks and High Command mounted, Bizbot laid out a plan for a leadership change. On October 15th, 2017, ExcellentJ and Bizbot19 selected SCP504 to lead the group.

On October 28th, 2017, Bizbot19 transferred ownership to SCP504. SCP504 then shutdown the group to work on the Arctic Patrol Base.

The group has seen no activity nor development since 2017. 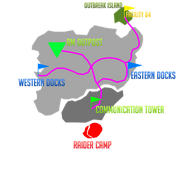