Over the next 30 days we’ll be selling exclusive, commemorative items as a sendoff for Tickets.

Users will have 30 days to spend down their Ticket balances on commemorative Ticket items, user ads, or to trade them using our currency trading system. In addition, Roblox will be awarding gifts over the next couple weeks. By completing tasks on Roblox, namely playing and creating, you will earn virtual items.
Tixapalooza was a major sale that involved many Ticket-themed retextures of popular items being sold daily. From March 15, 2016, to April 13, 2016, one ticket-themed item would be released per day. The order that the ticket-themed items were released in was from most expensive to least.

There were some other changes that were made as soon as the announcement was made, such as tickets no longer being rewarded from place visits, users no longer receiving tickets daily, and the price floor being lowered to 5 Robux. On April 14, 2016, tickets were removed from all visual aspects the Roblox website. Many instances of tickets remained in the website's code, however.

In order to reduce this article's size, this section has been collapsed. Click on the [Expand] button in order to view the collapsed content.

In order to reduce this article's size, this section has been collapsed. Click on the [Expand] button in order to view the collapsed content.

Roblox also announced a task system for Non-Builders Club users that rewarded gifts to the users weekly by completing tasks specified in the description of said gift's page. Roblox never continued this though and has only released 1 set of weekly gifts only obtainable from March 16th, 2016 to April 11th, 2016.

This is the image that was shown on the Roblox blog post that informed about the removal of tickets: 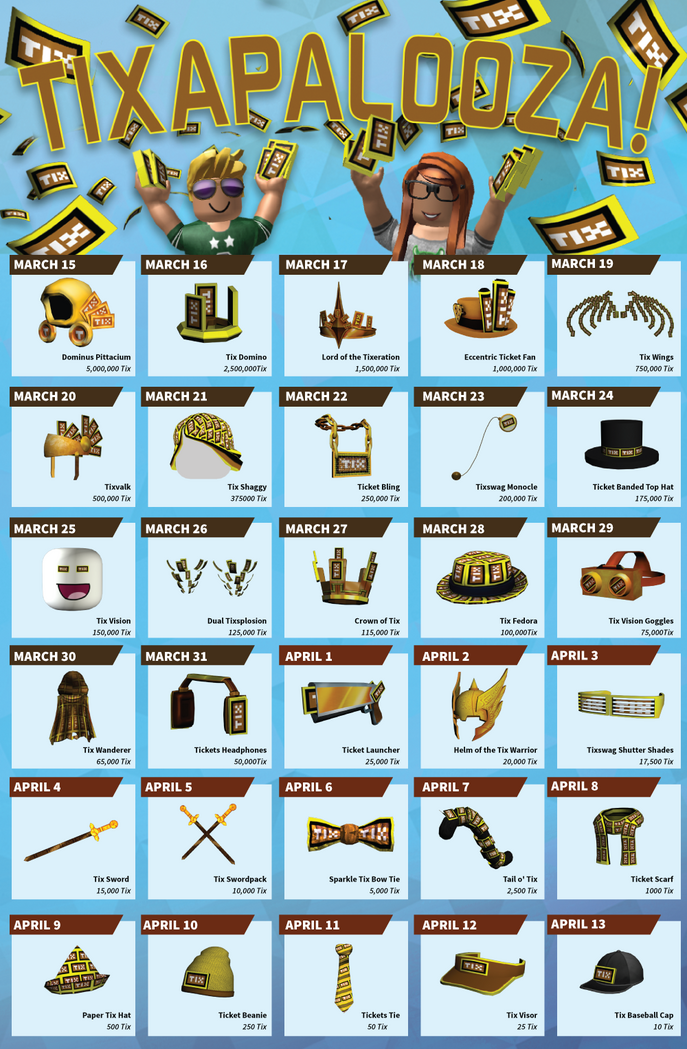 Retrieved from "https://roblox.fandom.com/wiki/Tixapalooza?oldid=856098"
Community content is available under CC-BY-SA unless otherwise noted.