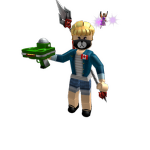 I am an engineer by trade, and have been doing different engineering roles for various companies for the last 17 years. One of the things that I am pretty good at is figuring out how to solve problems with code. What does that mean? Well it means that by using various tools like Chef, Ansible, Terraform, and simple Bash scripting I can deploy infrastructure and configure the software running on it by only using progamming code. This removes the human element from scaling and deploying infrastructure. All this leads to something called DevOps.

In my free time I enjoy working on Minecraft mods. I have a few mods of my own, but I'm more known for the work that I did on Applied Energistics 2 after AlgorithmX2 left the modded Minecraft scene. I have also been known to do programming streams on Twitch from time to time. When I'm not working on Minecraft stuff, I do hop into Roblox from time to time. I have enjoyed playing some of the simulation games that are pretty popular.

I also have non-computer hobbies as well, one being photography, I like to hop on a plane to a random place with just my camera bag and go spend the day taking pictures of a landmark. Its always good to have a hobby that isn't close to what you do for a living.

Retrieved from "https://roblox.fandom.com/wiki/User:Fireball1725?oldid=735121"
Community content is available under CC-BY-SA unless otherwise noted.